After tooling around the very interesting and underrated city of Brno, with medieval labyrinthine tunnels that wind this way and that under the city, Hannah and I hired a wonderful guide, Helena Svedova, to drive us into the Czech countryside. We had read that there was a very unusual ossuary in the crypt under the Pilgrimage Church in the village of Krtiny, (Hannah and I worked all day to master the pronunciation of KRTINY which sounds like a sneeze–I don’t think we came close to succeeding even though intrepid guide/ tutor Helena was encouraging and complimentary) unusual, because here several of the skulls are painted with decorative laurel motifs, the only known example of this in the Czech republic.,

The magnificent Krtiny Church of the Virgin Mary 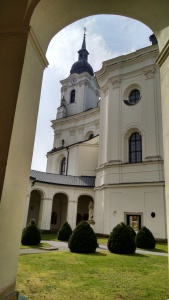 was designed by the renowned Baroque architect Santini, who was hired to design several basilicas in this region. We had no idea what a treat we were in for. Helena had called ahead to arrange a viewing of the crypt for us which is not normally open to the public. The monseigneur of the church greeted our arrival with a special carilloning of the bells

and then gave us an intimate tour of the basilica. We loved this monseigneur who so clearly loved his church. In describing the genius of Santini, the monseigneur used the words, ” a Niagara Falls of light”.   Tears came to his eyes as he recounted the story of the building of the church. 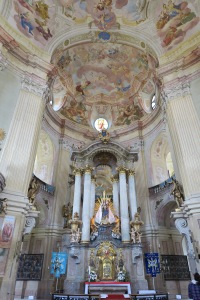 Santini unfortunately died before the builders got to the most difficult part of the dome. 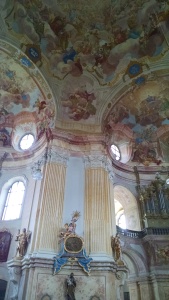 They became so overwhelmed they didn’t think they could proceed. The next day a mysterious carpenter showed up to work. With his guidance they all got back to work. Every night the carpenter mysteriously disappeared, never joining them at the pub or to bed down with them at the tavern. Every morning he returned and led them through the next difficult section. When they finally finished their work they realized their daily visitor had been Joseph (as in Jesus’s father)

where beside the painted skulls (which denote church patrons), there were neatly stacked and niched (by contemporary archaeologists) 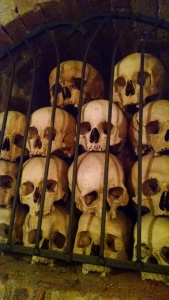 The Krtiny Church also houses a wonderful collection of devotional paintings by untrained artists, given to the church in gratitude for favors granted:

We were fortunate that our route with Helena to Poland brought us to a second Santini masterpiece, 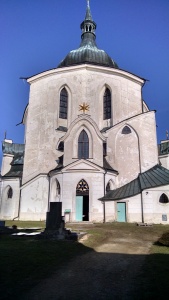 the pilgrimage Church of St John of Nepomuk at Zelena Hora, pictured above. This church serves as a reliquary to the tongue of St John Nepomuk, the patron saint of Bohemia. Look up at the impossibly high, vaulted ceiling to see a sculptor’s rendition of the tongue:

the symbol of St. John’s incorruptibility. He had been the confessor for the queen of Bohemia and refused to divulge what he heard whispered in the confessional.

And finally today we crossed into Poland to visit the Kaplica Czaszek (skull chapel) in St. Bartolomew’s Church, Czermna in the spa town of Kudowa Zdroj. 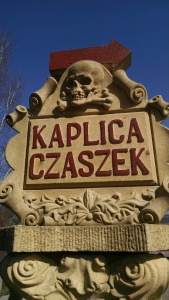 This tiny side chapel houses a most astounding display of bones covering every inch of wall and ceiling, arranged in stunning patterns. Just as we were about to leave the chapel guide, after leading everyone in Polish prayer, lifted up a trap door in the floor and revealed that there were hundreds (thousands?) more bones strewn unceremoniously below us.

6 thoughts on “The Great Santini”