A museum whose mission is “to  question the distinction between normal and abnormal”?  You know I’ve got to write a post about that! Just the name itself, the Dr. Guislain Museum, intrigues. Never mind the fact that the guidebooks don’t mention this museum as one of the reasons one might consider visiting picturesque Ghent, Belgium. It is this unique museum that put Belgium on my itinerary a couple years ago.

I had noticed that several of the European outsider artists I follow had work in the collection of the Dr. Guislain Museum, and curious about the museum’s name in relationship to its collection I looked it up. Turns out, not only was Dr. Guislain a real doctor, he was an early proponent of humane care for psychiatric patients. He headed up the first insane asylum in Belgium which became known later, as the Dr. Guislain Hospital.

Following in the enlightened footsteps of the hospital’s founder, the modern day (and current) director, Dr. Rene Stockman, pursued the provocative idea of converting a large part of the hospital into a museum. At the heart of this vision was the belief that light needed to be shed onto the dark history of psychiatry in order to normalize society’s relationship to the mentally ill. Rather than hiding away the array of objects and photographs that the hospital had in its possession, the director put them on display.

So that’s one part of the museum: the history of psychiatry. There are two other components to the museum: temporary exhibits (mainly contemporary art) that relate in some way to the theme of mental health (There was a great show up when I visited entitled “Nervous Women”, which examined  illnesses historically and culturally  linked to women, such as hysteria and anorexia). The third section of the museum–the section that drew me to Ghent in the first place– is their major collection of art made by artists with mental illness or intellectual disability.
The Dr. Guislain Museum has the largest holdings of Netherlands’s most celebrated outsider artist (one of my all time favorites): Willem Van Genk.

Van Genk, who died fairly recently, (2005) drew, painted and sculpted the subject matter he was obsessed with: urban landscapes with a particular emphasis on transportation systems, and most with references to his other obsession–Russian communism. 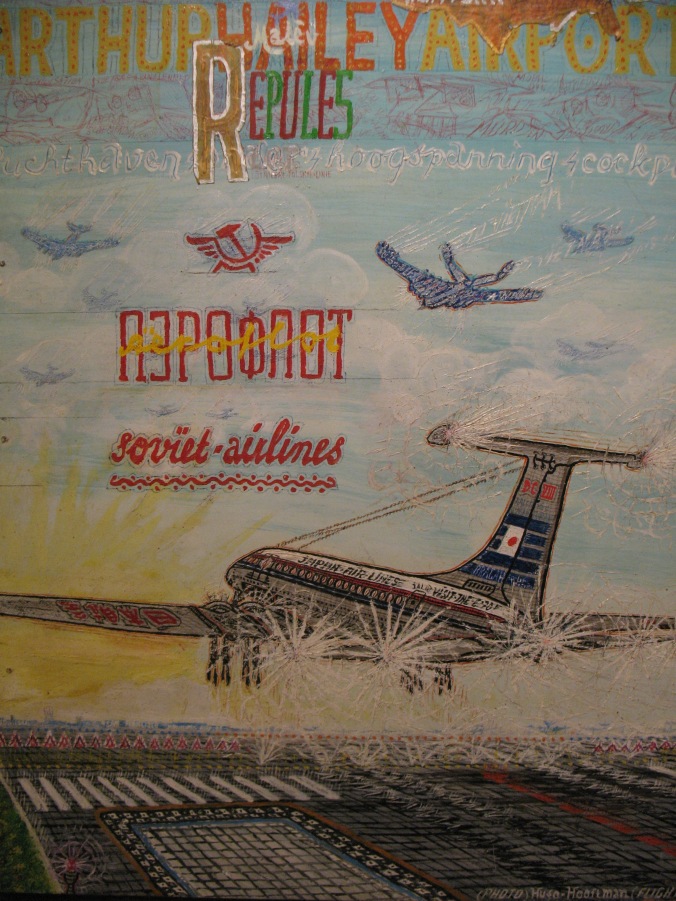 At the end of his life, Van Genk turned almost exclusively to sculpture. The Dr. Guislain Museum has  installed his work as it had been set up in Van Genk’s own home: 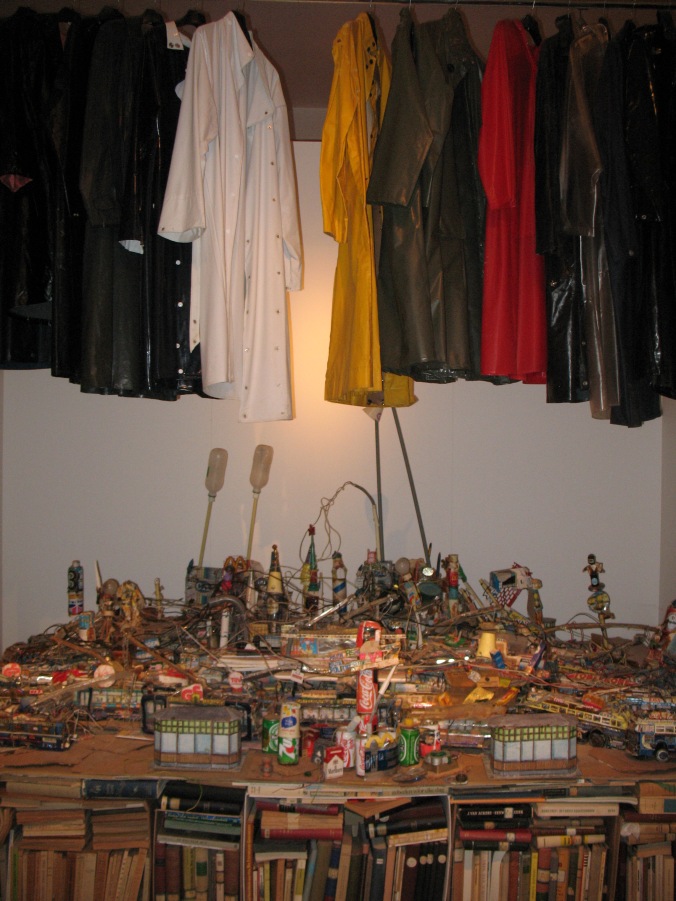 The raincoats, by the way, were a major part of Van Genk’s oeuvre, as is the library of books upon which his massive train station sits. 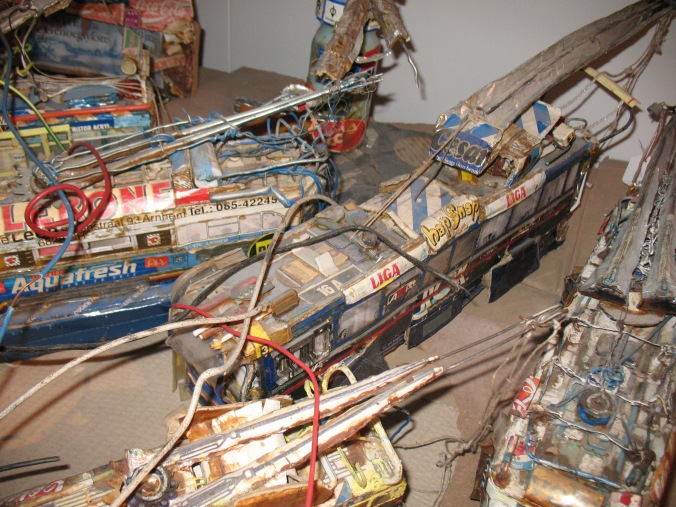 Another extraordinary room-sized installation of the little known outsider, Hans Langner, is testament in and of itself what an unusual institution the Dr. Guislain Museum is. 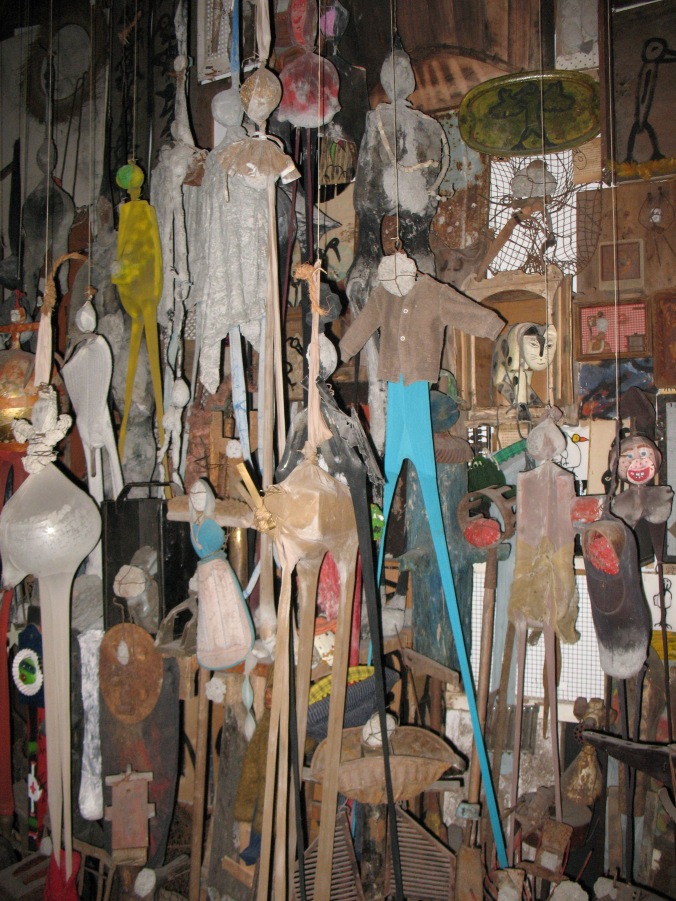 Can you think of any other venue that has given such a difficult, idiosyncratic work this amount of space and this level of respect? 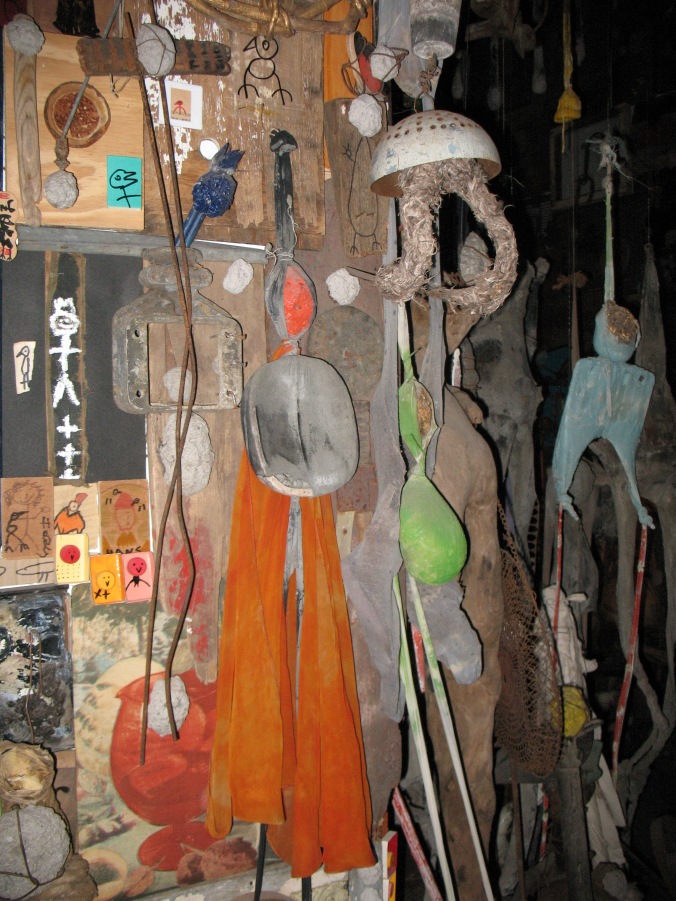 And then there’s many, many stellar works by both well known and obscure outsider artists.
Oh, I wish I had taken note of this artist’s name. If by chance you know, tell me and I’ll  gratefully add in the info. 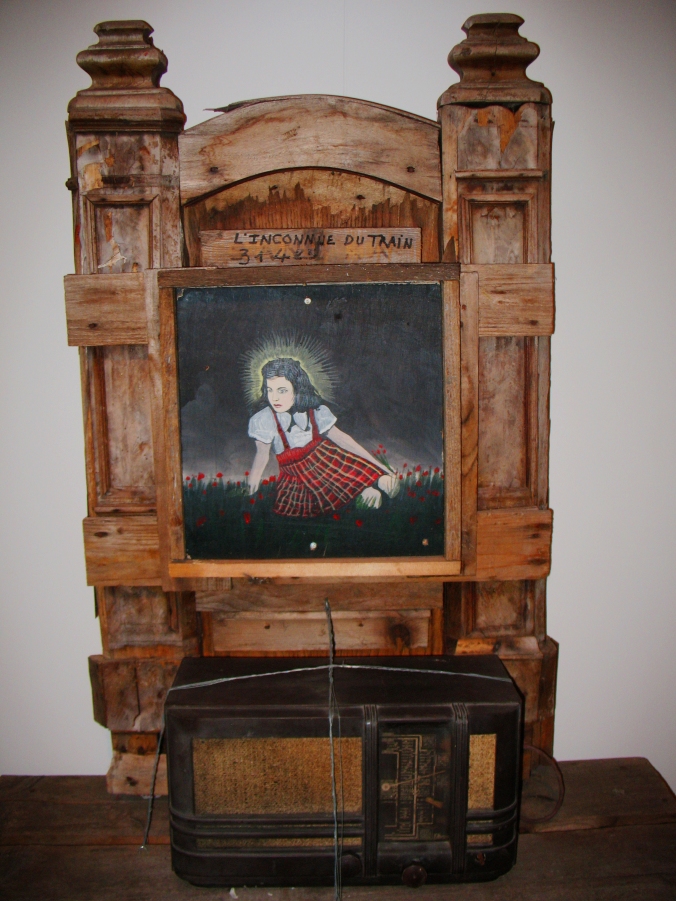 Henk Van Es to the rescue again! He helped me identify the maker of this submarine: another Dutchman, Gerard van Lankveld 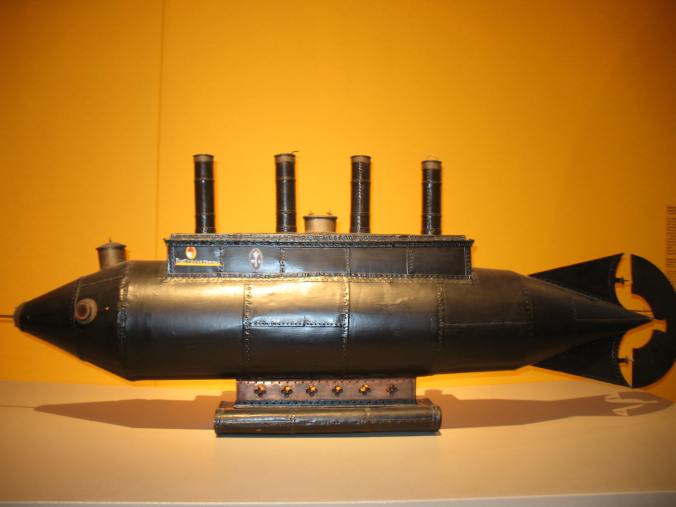 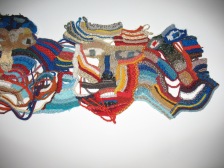 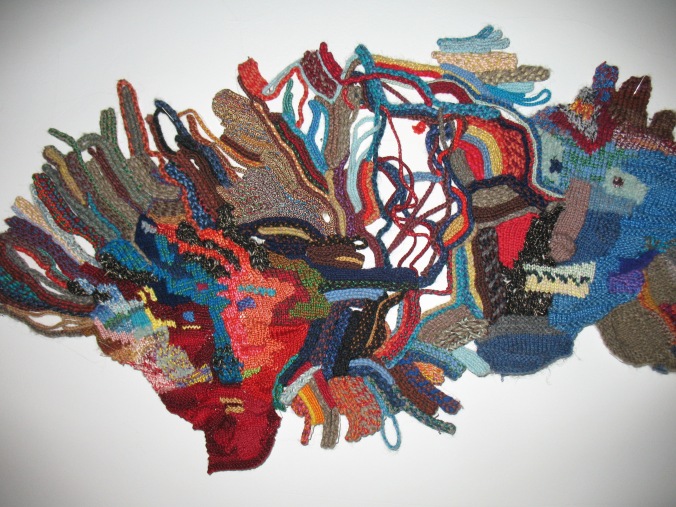 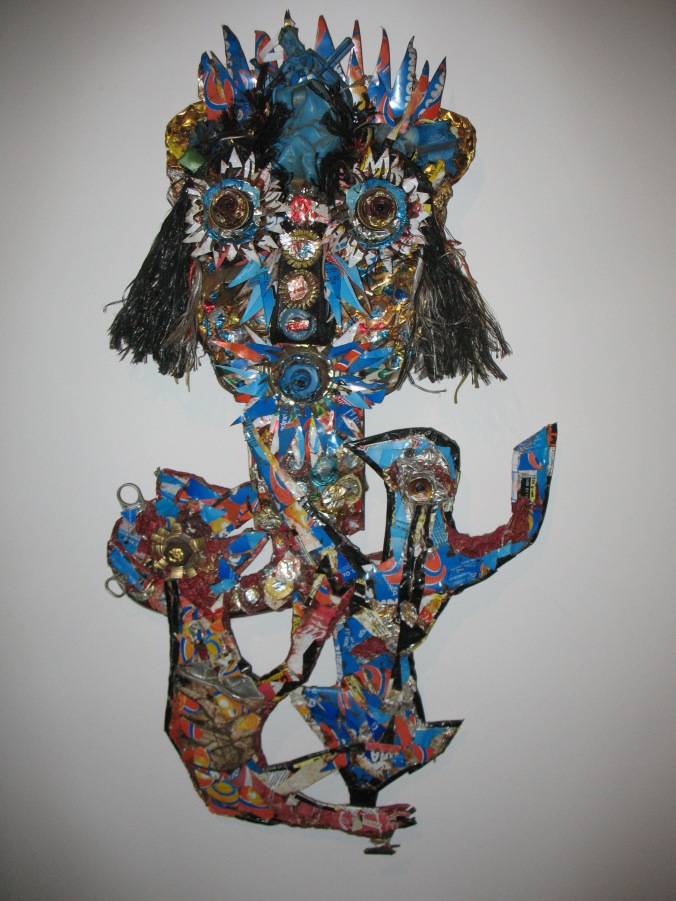 This gem by Adolf Wolfli:

Well, I could go on–I probably photographed the whole collection. Hopefully I’ve enticed you enough that should you find yourself in Brussels, you’ll hop on the train for the hour-long ride to Ghent. And drink in this treasure for yourself! 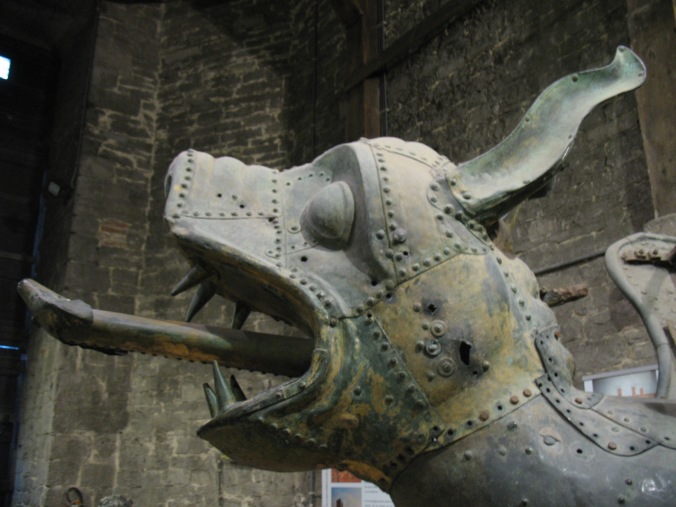 Hat’s off (er, I mean–on!) to my fabulous travel partner, and coincidentally my husband, who was thoughtful enough to wear clothing that matched this very photogenic facade. 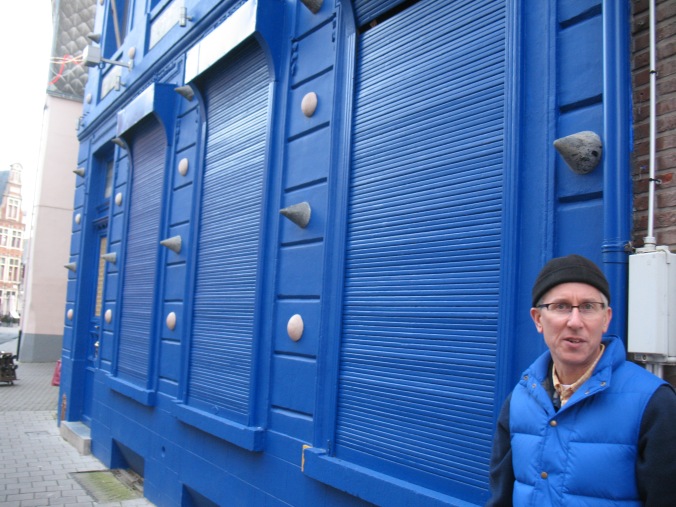 Should none of this interest you, I am certain, that at the very least you will find solace in Ghent chocolate (It is Belgium, after all!) served to you by this chocolatier: 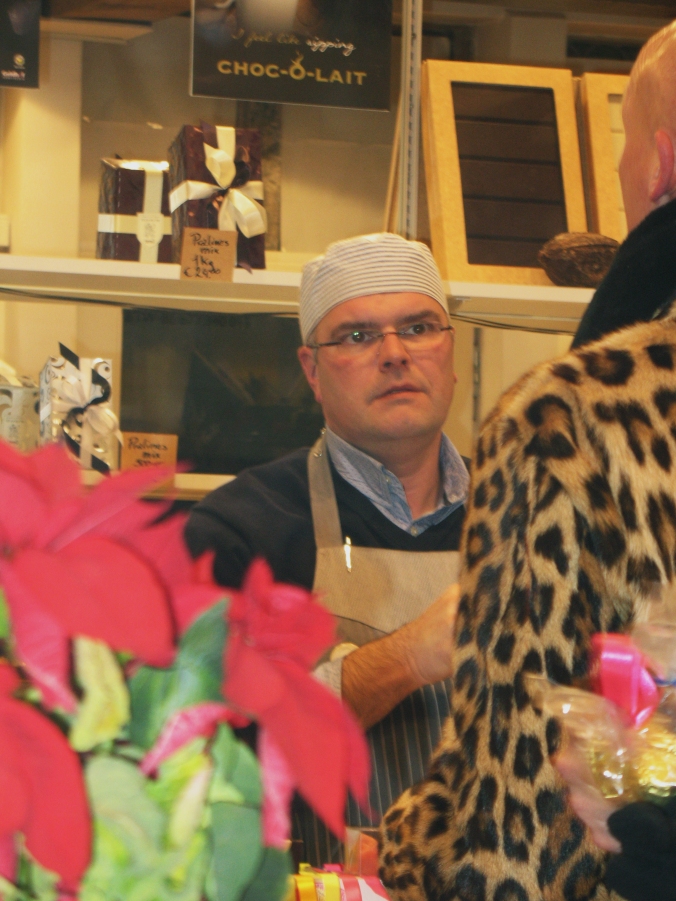 I get the sense he was put off by the leopard skin coat of this customer. I know you will not wear a similar coat–so do not worry–he will be more friendly to you. 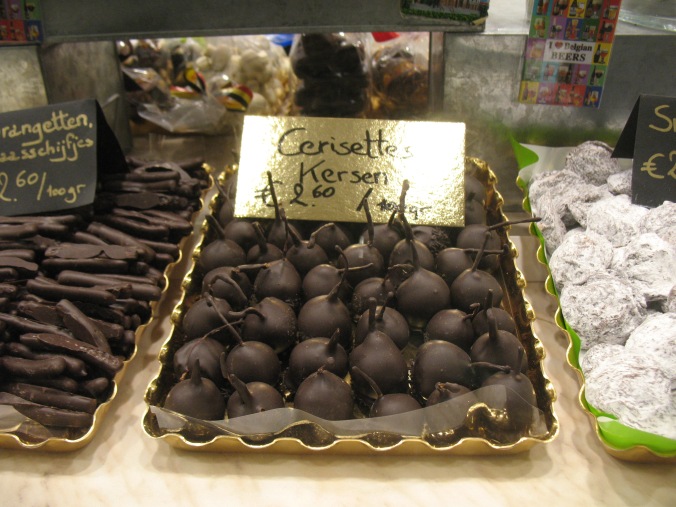 I love museums of all kinds: art, science, ethnology, history. And while I truly appreciate the big famous venues, I have a special place in my heart for small unheralded museums. Most of all I love a museum which perfectly reflects the gestalt of the collection. Rather than the traditional neutral role that most museums play in relationship to  their collections, these little anachronistic gems become works of art themselves. Their very beings are so intertwined with their holdings that collection and museum become one.

Just such a gem is the Pollock’s Toy Museum in the heart of London. Currently under the directorship of the grandson of the museum founder, Marguerite Fawdry, Pollock’s began its life not as a museum, but as the workshop and store for Benjamin Pollock’s Toy Theaters. Mr. Pollock hand painted and constructed these popular Victorian  paper entertainments. The museum, which was founded in 1956 on the premises of the toy theater shop ( at a  different location than where the Pollock Toy Museum is today), has many of the original paper theaters in its holdings.  The collection has been augmented  with  Victorian through 1950’s era toys. 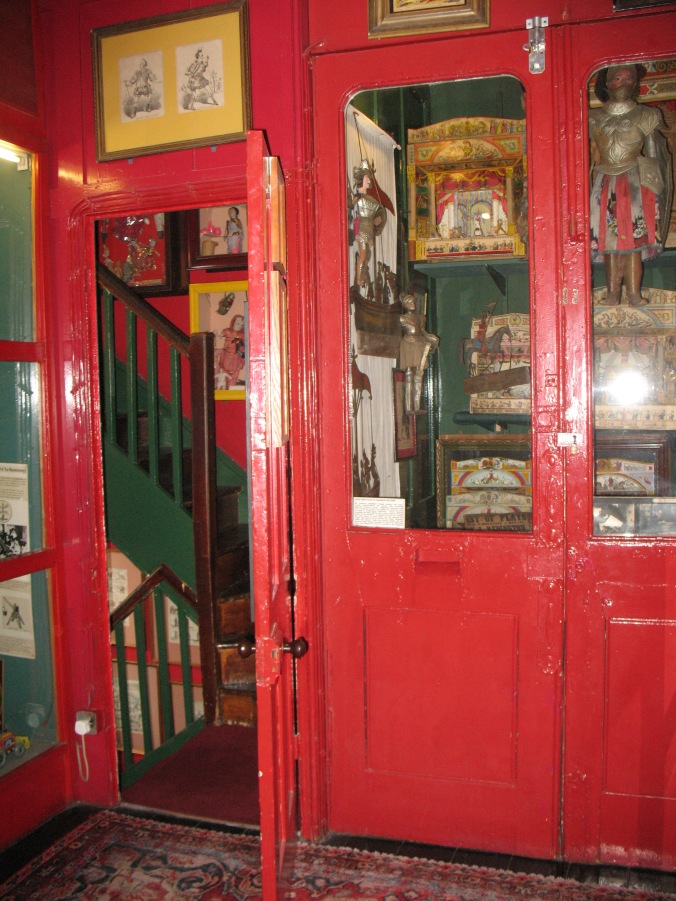 Stepping into the museum I wanted to pinch myself to see if I had fallen asleep on the couch reading Dickens and was dreaming up my surroundings. The deeply satisfying, thickly layered paint of the red and green walls, doors and stairwell drew me into the space with a magnetic, slow motion kind of pull. After paying my 6 pounds to the ticket taker, who beckoned forward,  I found myself pleasingly alone in this twisty-turny multi-roomed museum. 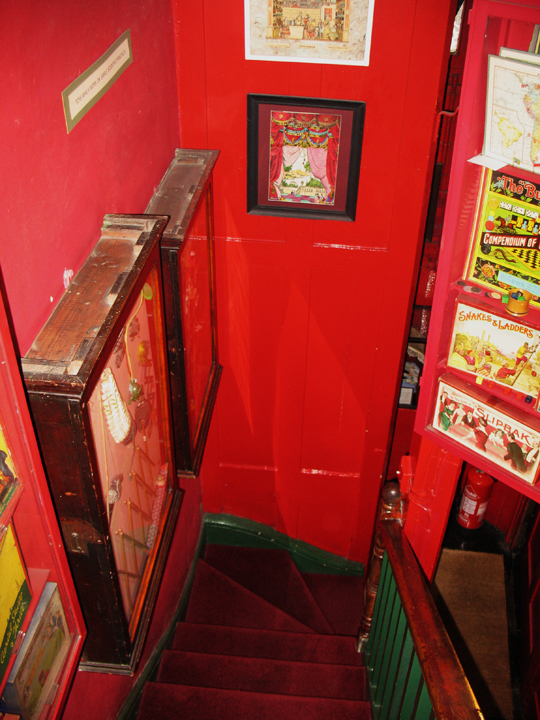 Up the steps, slowly, slowly, every inch another treasure to admire: 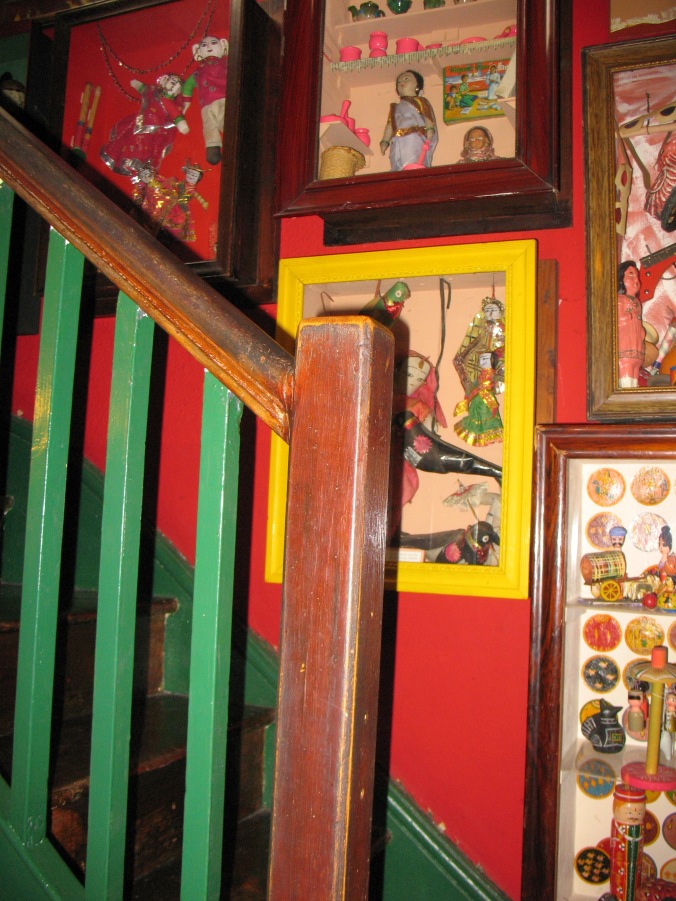 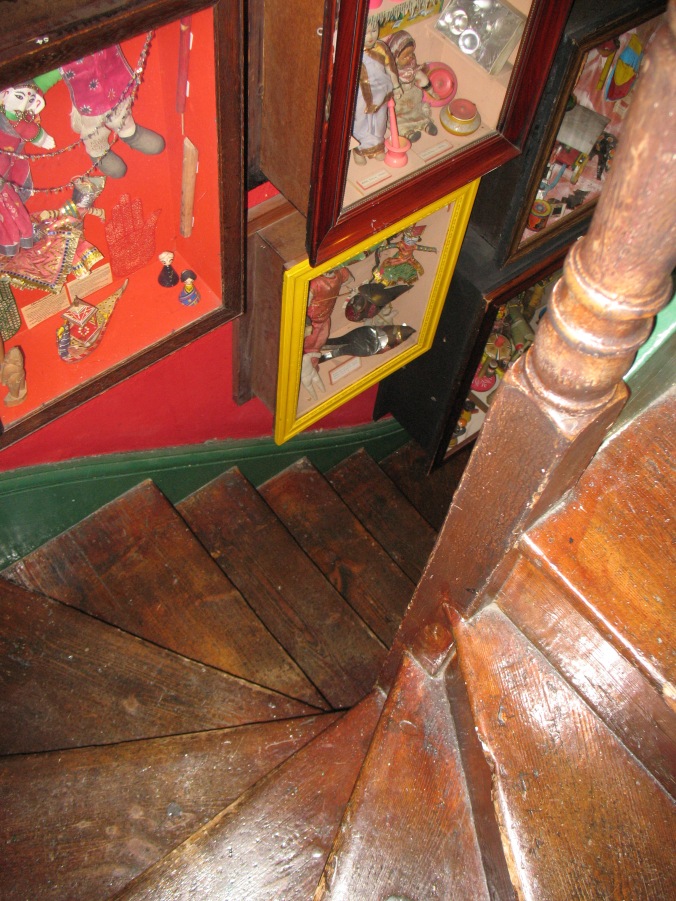 And then the individual rooms! Oh! Categorized and organized, but not too organized. 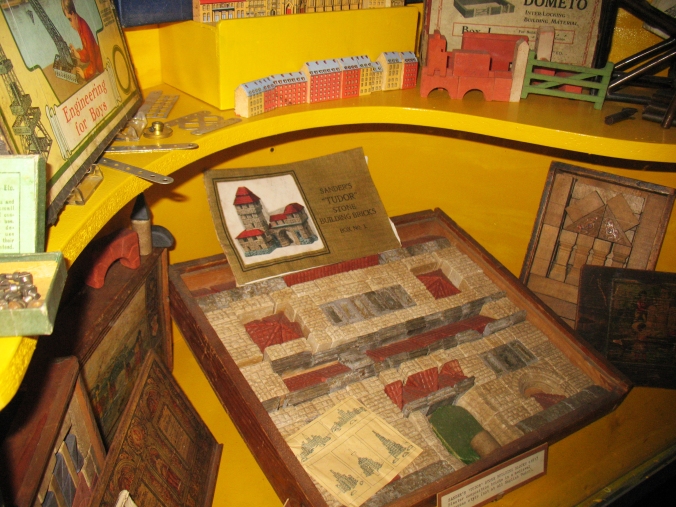 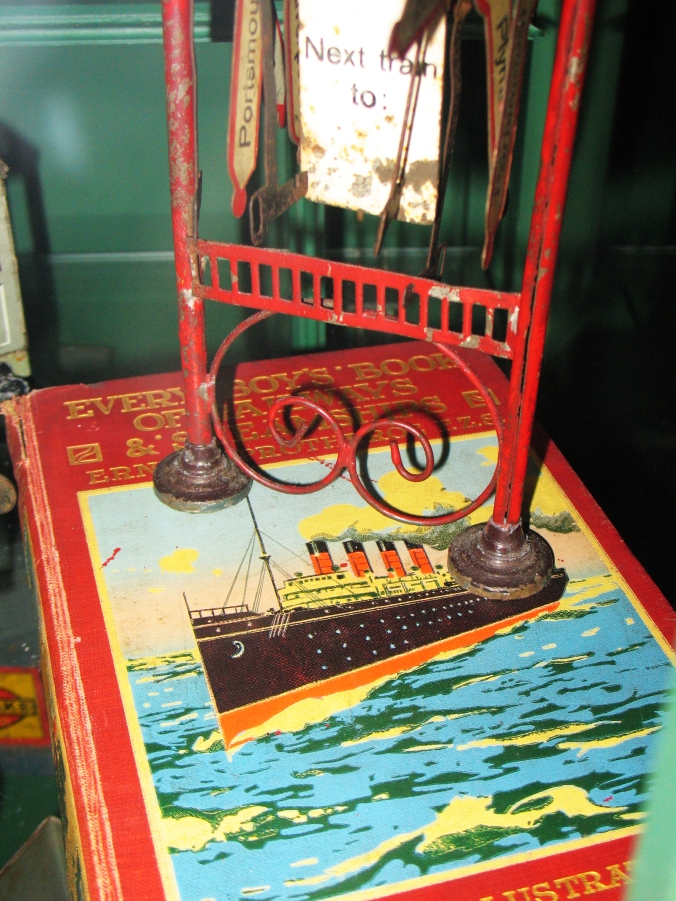 Stuffed with playthings, some just so barely brushing up against my own childhood that I wondered if my siblings would rush in and snatch the vision away and say these were their toys.

But, no, we’d been taught to share, so all was well. I could relax and drink it in.

And send myself backwards and forwards in time, at the same instant.

and marvel over how certain it once had been that some toys were for BOYS ONLY. I was happy that my brother’s Meccano set, a favorite of all of us kids, had not had this definitive labeling by the time it was manufactured for my era.

One of the things I love about the Pollock collection is how used the objects are. Chosen for being loved rather than for being in pristine condition. 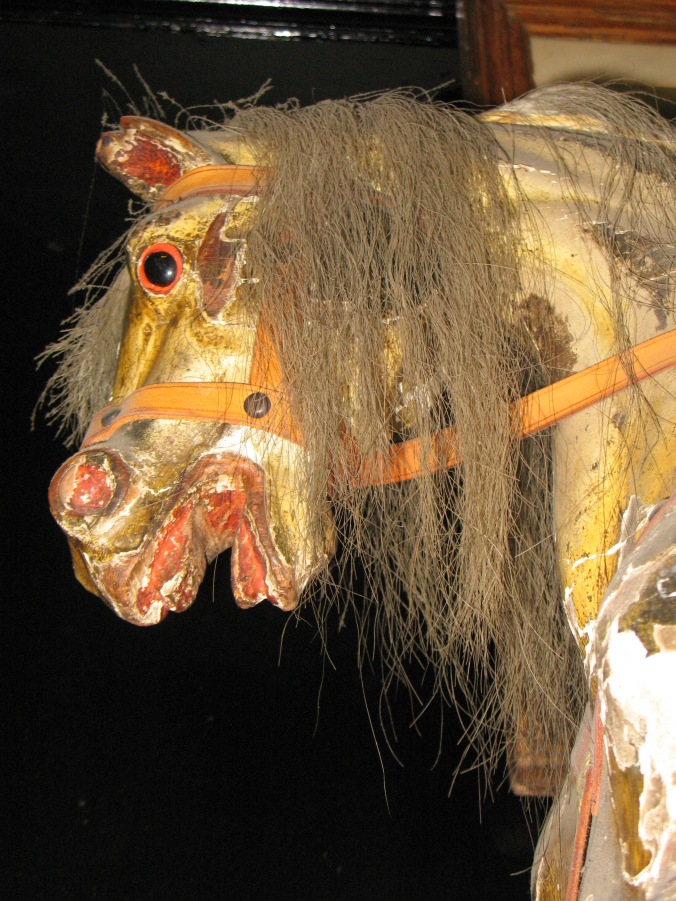 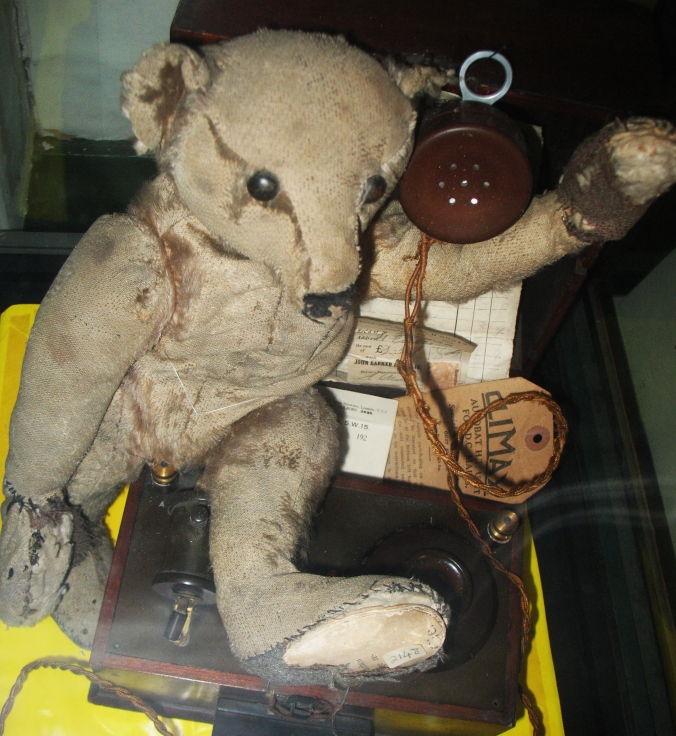 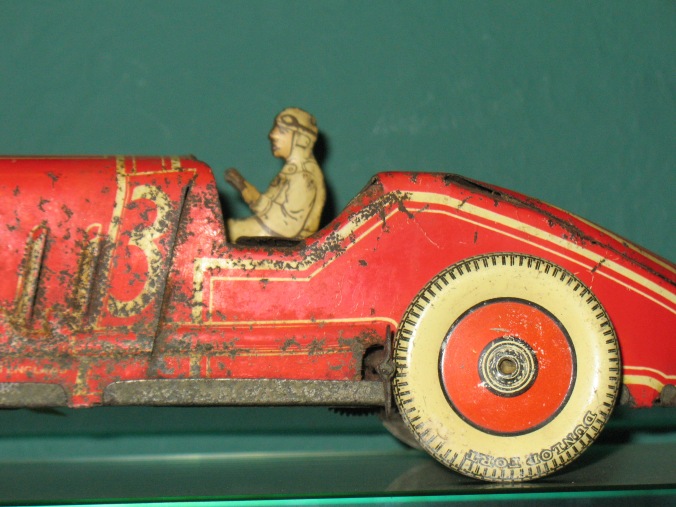 The doll room showed this most of all. 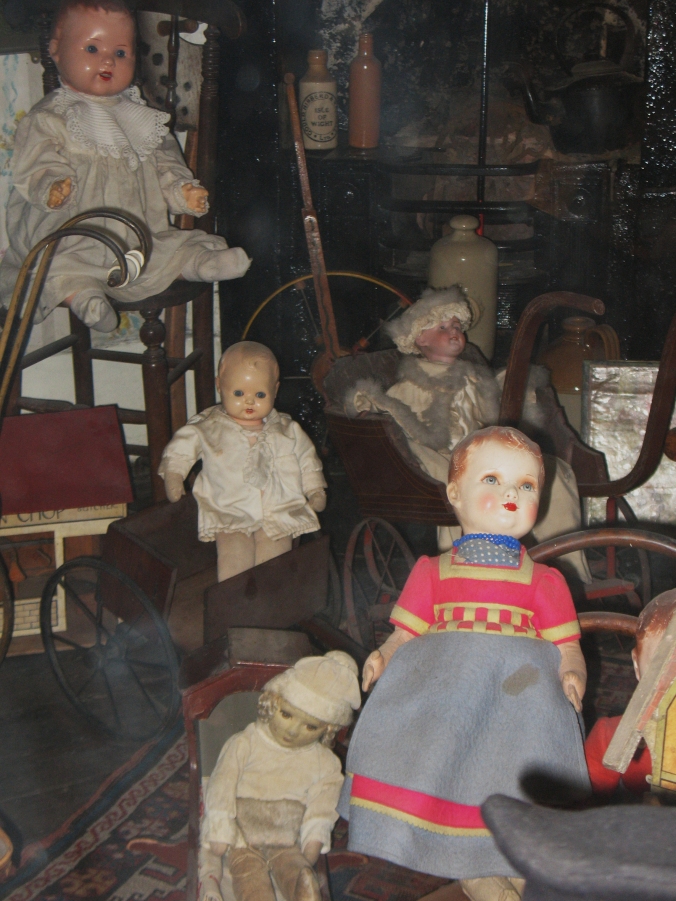 And yes, the doll creep factor is in full swing in the doll room. This doll and the next could easily be responsible for the invention of the night light. 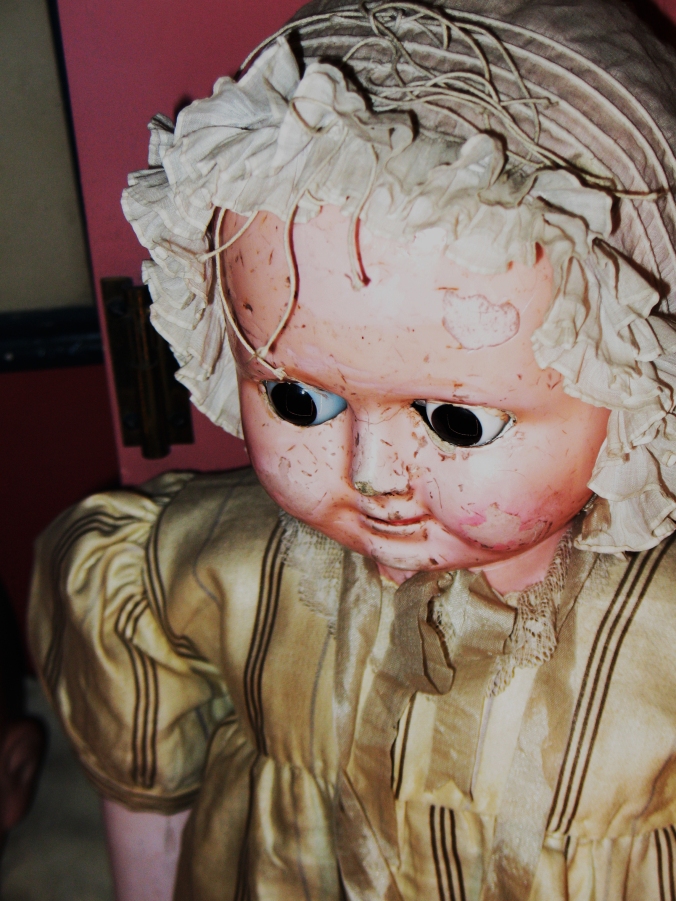 Not hard to come up with a story for this pair, Constance and Geraldine, siblings trapped together for eternity, their individual personalities becoming sharper over the decades. Geraldine, always the  confident one, has become insufferable, and Constance, well, poor thing, by now she’s just a shell of her former self.

Chastity could never go outside to play because she could not risk getting grass stains on her outfit. 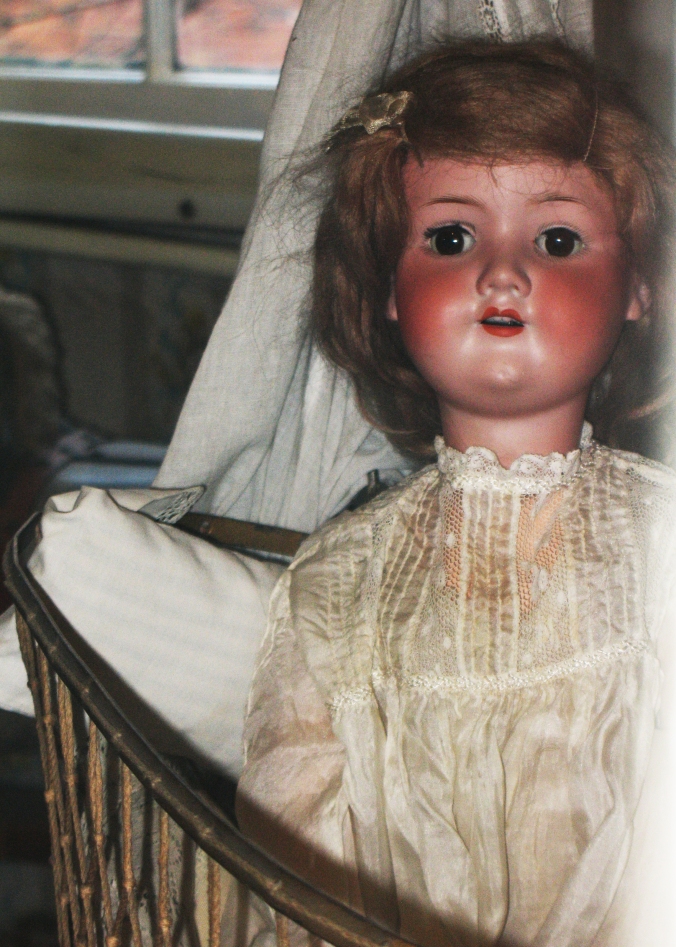 And no wonder she dressed this way. This was her mother–no fun at all!

Here’s the look on Tildy’s face after her brother told her she most definitely could NOT play with his Meccano set.

It was embarrassing going out with Gertrude. She didn’t seem to understand she was making a spectacle of herself. She never seemed to notice that folks were pointing at her and whispering to each other.

Ah, that Lucinda! She’s been caught stuffing sugar cubes in her cheeks again.

Mary Ella is the perfect child when her parents are at home. But as soon as they leave for the evening she throws wild parties that start with Spin the Bottle and then proceed to much, much worse activities.

And these two kids, there’s a reason why they look, well, so disturbed… 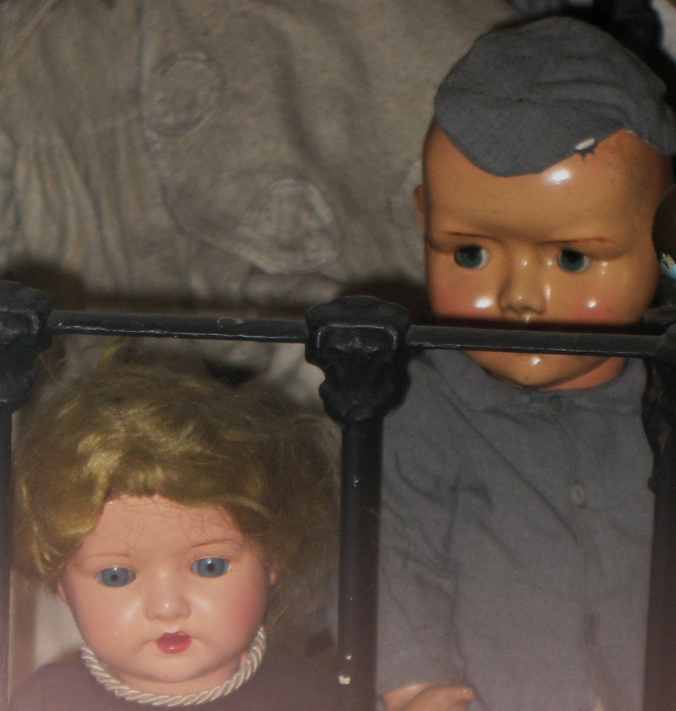 All their furniture is made with BONES!

Time to go! Back down the stairs, past all those games there was never enough time for. (Yes, I CAN end on a preposition if I want to!)