It was so hard to imagine that neighborhood kids used to consider Mary Nohl a scary witch. Here we were, arriving at her home unannounced. She threw open her door, greeted us with a huge smile and beckoned us in like old friends.

Mary (age 86 at the time of our visit) told us the kids had been afraid of her because she was different. Her live-in aid, Vicky, who had once been one of those neighborhood kids confirmed this and admitted she too had thought Mary and her wildly decorated house were creepy. She had kept a wide berth. Others, though, had taunted Mary and repeatedly vandalized her yard art. Mary told us this with a sense of humor, but I’m sure the neighborhood disdain for her was painful.

We didn’t know what to expect as we wound our way along the shore of Lake Michigan through her oh-so-ordinary suburban neighborhood in Fox Point, Wisconsin. Every lawn was manicured to a fare-thee-well. The whole neighborhood was so meticulous, and clean. No rusty cars, no junk on porches and not one whiff of creativity. We couldn’t imagine we’d gotten the address right. We couldn’t imagine Mary’s extravagant home environment could fit in here. Ah, well, that was just the point! Mary Nohl had never had one ounce of interest in fitting in.

We rounded the bend and here was Mary Nohl’s home: A detail of the cat door:

Mary’s lawyer father had introduced her to cement at the age of 12. Together they constructed the driveway gateposts. After her dad’s death Mary added heads on top of the posts. “My father would roll over in his grave if he saw what I’ve done”, she said, referring not just to the augmented driveway posts but to the lawn populated with Easter Island-esque figures. I had seen pictures ahead of time of the concrete lawn figures, but the inside of Mary’s house was such a surprise. Every bit of surface had been embellished.

The blue and turquoise doors were covered with  bas relief carvings and bolted with mechanisms which Mary had conceived of and executed with characteristic Yankee ingenuity.

The walls, the floors, and even the carpets were sponged and splattered with red paint.

From the ceiling of another room dangled row upon row of tractor feed paper edges which brushed against the forehead if you were as tall as Mary. . Remember how we used to feed accordion folded paper into our printers in the 1980’s? Remember how the edges of that paper were those pesky endless strips that you used to have to pluck off the edges of the page before you sent your document to its final destination, like your boss’s desk? Well everyone, EXCEPT Mary Nohl just threw those strips away. For her they were  a free raw material, not to be wasted but to be put to good use.

Mary’s sun porch was hung with ribbons. It seems she had never thrown out a ribbon in her 86 years of gift unwrapping.

Mary who stayed a single woman her whole life (and who was quite content about that) had been encouraged by her father to attend college. Though Mary Nohl’s home environment is commonly considered “Outsider Art”, she in fact received an art school education at the Art Institute of Chicago in the 1920’s. Though unusually adept (for a woman in her era) at running and repairing power tools, Mary was encouraged to pursue a more traditional employment route than the work in industrial design that she had originally envisioned for herself.  She tried a stint of teaching art in the Baltimore public schools but became discouraged by the limitations imposed on her and her students by the system. Mary decided to return home to Wisconsin, to be near family and friends where she set up a little ceramics business (again encouraged by her father).

Mary led us down to her basement which was filled floor to ceiling with the remains of her production. Though delightful to my eye, they were not big sellers, and so Mary went on to other projects. 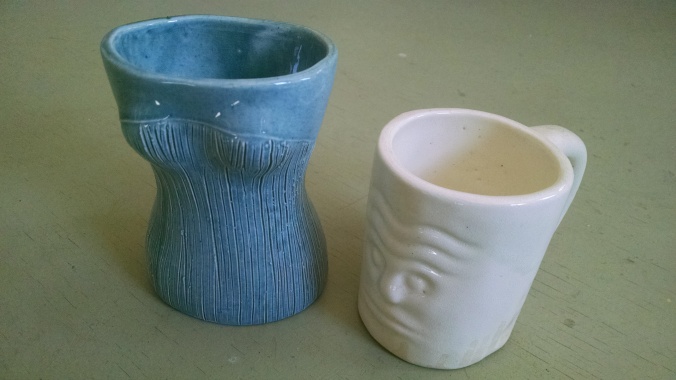 Around 1960, with the loss of her brother, followed by her father and soon after, the move of her mother into a nursing home, Mary was left to live alone for the first time in her childhood home. She now saw the world around her as her palette. She looked around her home and set to work making it truly her own.

Mary Nohl died shortly after our visit to her home. I feel so lucky to had met this wonderful woman who summed up her guiding principle this way: ” Being conventional is worse than all other sins.”

Happily, Mary gifted her property to Wisconsin’s Kohler Foundation which has built an internationally recognized reputation for championing and preserving outsider art environments. Mary Nohl’s home is currently being restored and will open to public at a future date.