Cossé-le-Vivien: a speck of a village in the Mayenne Department in the Pays de la Loire region of  France, equidistant from Le Mans, Nantes, and Caen, in a region not on many tourists’ itinerary . But, oh! If you go! A wondrously bizarre environment beckons you in with jaw dropping sculptures.

This Outsider environment, La Frénouse, was created by Insider artist Robert Tatin.  La Frénouse is a tour de force in concrete that took Robert Tatin twenty years to complete with the help of–you guessed it–his wife, Lise. (Do you think it might be relevant that Lise was his fifth wife? Wonder what he asked of the other four) )

OK, let’s start at the beginning. Robert Tatin was born in 1902 of humble origins in nearby Laval. His father worked for the fairgrounds setting up and even performing in the local circus, an environment which had lasting impact on Tatin’s aesthetics.  Robert Tatin began his working life at age fourteen as a house painter.  As a young adult Robert Tatin took off for Paris to study painting.

When he completed his studies at the school of Beaux Arts he returned home to earn a living. Lord knows, that wasn’t going to be as an artist!  He morphed this first profession as house painter into decorative painter, then designer, and eventually he became a sought after restorer of historic architecture. With extra cash in his pocket from his successful contracting business Robert Tatin set off to travel the world…and to paint!

He was called back to France in 1938 to serve in the war after which he set up a small ceramic and fresco workshop to earn a living.  in Paris. He also began to pursue his painting in earnest.

While in Paris he formed friendships with several of the great artists living in Paris post World War II: Giacometti, André  Breton, Jean Dubuffet (inventor of the term Art Brut), and Jean Coctueau (of Beauty and the Beast fame). With these colleagues, Tatin participated in what was called the “cultural reconstruction” of post war Paris. Tatin’s painting and sculpture garnered him national and eventually international recognition. He even won first prize in sculpture at the Sao Paulo Biennial in 1951. But it was his travels and encounters with indigenous people of Brazil that had the greatest influence on his artwork. 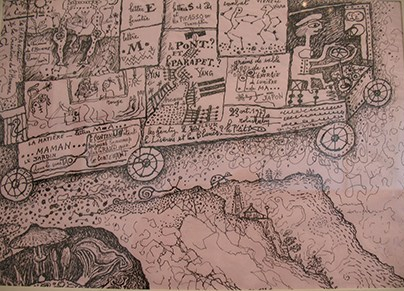 He quit the rarefied world of fine arts at the age of 60, returned to his homeland to live out the rest of his life. He bought a little ruined farmhouse in Cossé-le-Vivien and got to work restoring it.

Once this cozy home was livable, Robert Tatin started work on what turned out to be his grand oeuvre, which was to take him the next twenty years to complete. There is really no easy way to categorize or even to describe with words the sculptural environment that Tatin called, La Frénouse. When I checked google translate for the definition of La Frénouse, I got this for an answer: La Frénouse. OK, well…

La Frénouse is first an homage. One enters the property via Tatin’s “Alley of Giants”, 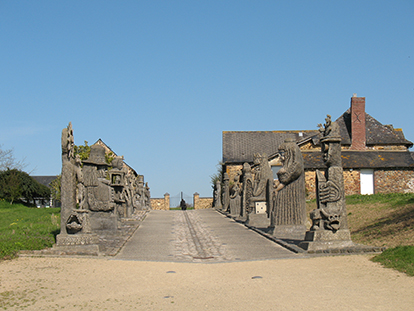 an 80 meter long paved path lined with nineteen statues, each labeled with the names of a historic, mythical, religious, or artistic personage who influenced Tatin to believe what he believed in and to have the guts to pursue his vision. It’s quite a roster ranging from Joan of Arc (!) to Jules Vernes to Picasso. 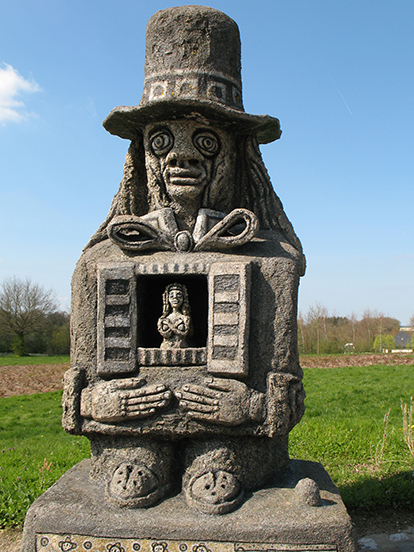 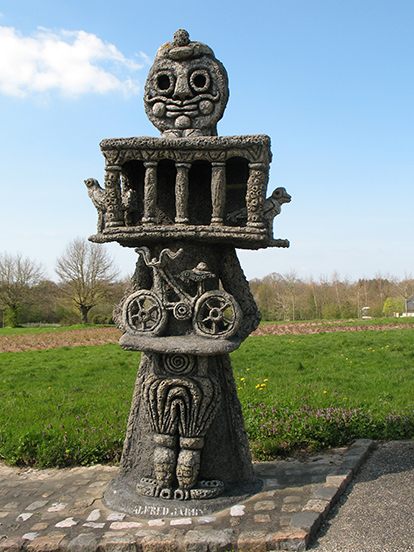 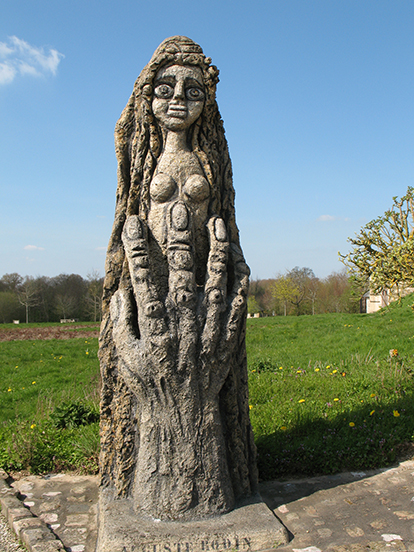 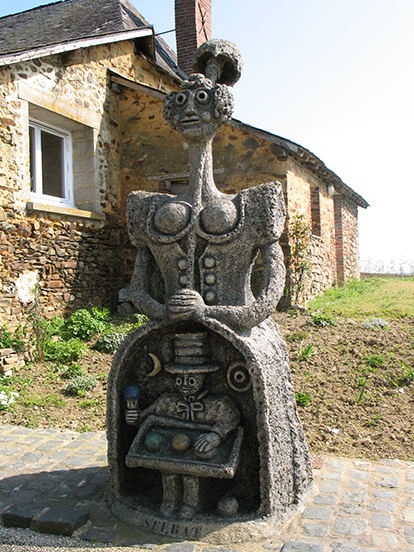 By the time you come to the end of the Alley of Giants you are well-prepped for the  bizarro aesthetics that Tatin poured into his garden, an odd combination of grotesque fantasy embedded with lyrical details.

The open-jawed dragon that headed up this post is the Guardian of Knowledge. If you are not totally swallowed up by him you’ll see his claws cradle dice, for surely chance plays a huge role in one’s fate.

At the center of the environment one enters the garden of Meditations, with twelve statues around a central reflecting pool, one for each month. Six rooms symbolize the rotation of the earth. One enters via the Gateway of the Sun and the Gateway of the Moon on the East and West sides. 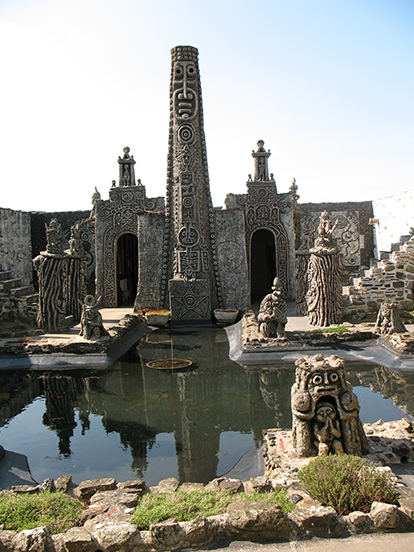 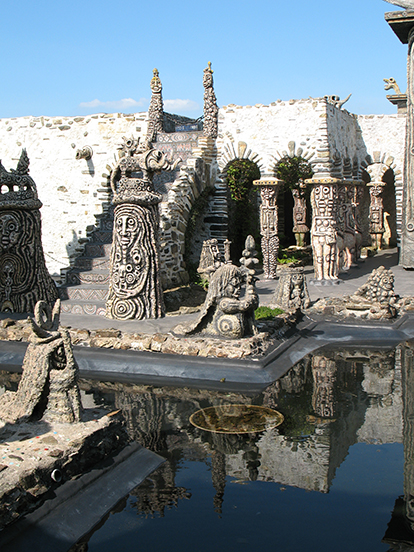 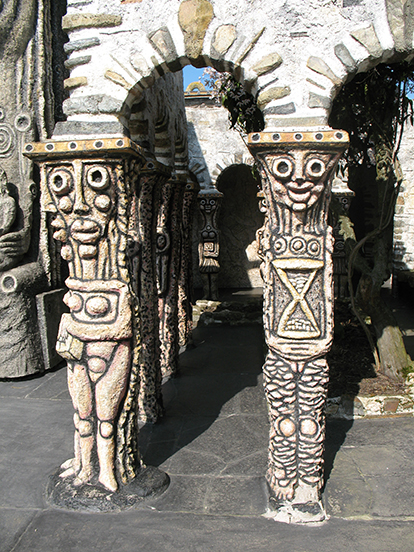 But really, it’s good not to over-analyze Tatin’s work. Scientist and art lover Otto Hahn put it nicely when he said of Robert Tatin’s creative impulse: “In all his quests, Tatin finds the same answer: you never reach paradise, unless you create it.”  And truly isn’t this what we’re doing as artists in our insane world?

My last post, “Creating an Ocean…” brought you just outside the city of Chartres, France. And surely if you are just outside Chartres you will continue on into Chartres.  And surely you will visit the famous, famous Chartres Cathedral. 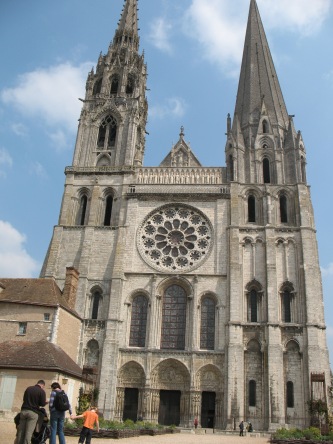 And I know,  because you are a “Quirk” reader, you will not simply finish with the cathedral, go to a cafe, then hop back on the next train to find the next cathedral in the next town. You will go to “Maison Picassiette“, a reasonable walk from the cathedral and one of France’s most famous quirky sites.

you will enter the  neighborhood where Raymond Isadore and his wife Adrienne Dousset made their home. Isadore, a cemetery sweeper,  built his house in 1930, cozy enough, but nothing that would have stood out in his ordinary surroundings. On a walk one day his eye was attracted to a pretty shard of broken pottery which he picked up and brought home. And so, it is said, began his collecting habit. Soon he was frequenting rubbish dumps, actively seeking out cast away crockery. With the little pile he had amassed in his garden Isadore began a modest mosaic project on the wall of his home.

Pleased with the effect, Isadore carried on.

In fact he didn’t stop until twenty four years later, when he had covered every surface of his house, inside and out. 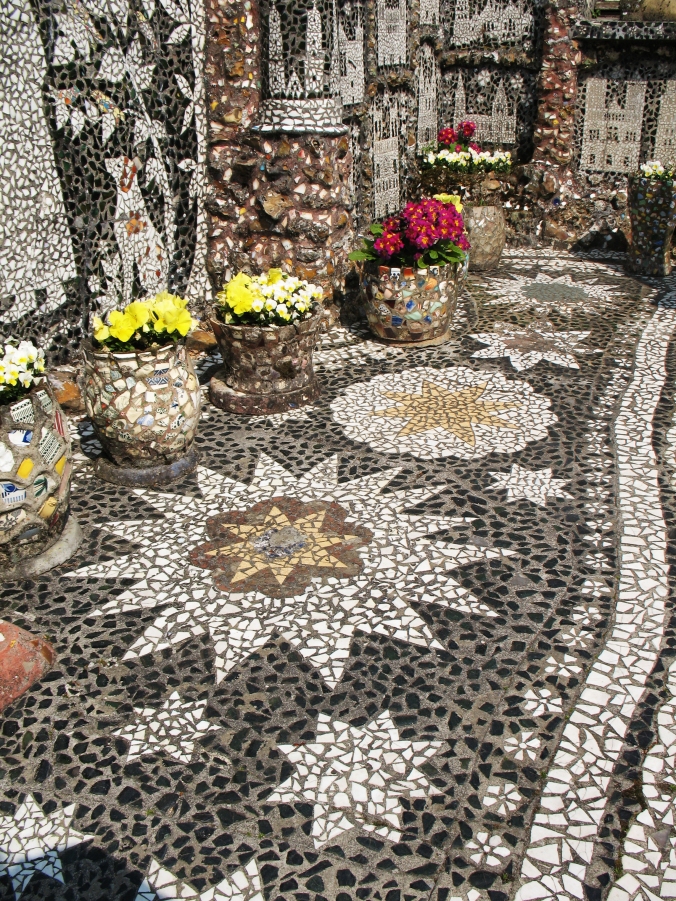 From walls to floors to ceilings

interspersed here and there with his folkloric paintings.

With his wife’s approval, when all the structural surfaces were covered, Raymond Isadore tackled the furniture. 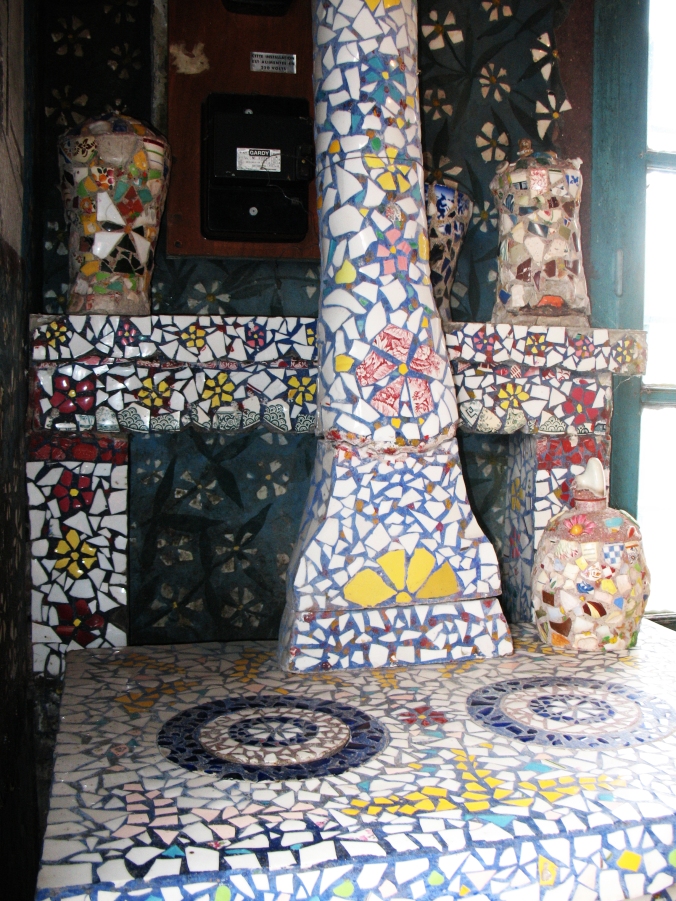 An autodidact, Isadore paid homage to great artists and monuments, including these mosaic portraits of French cathedrals adorning the garden wall. And in the center–a throne for his Madame and himself to rest a spell and admire his work. 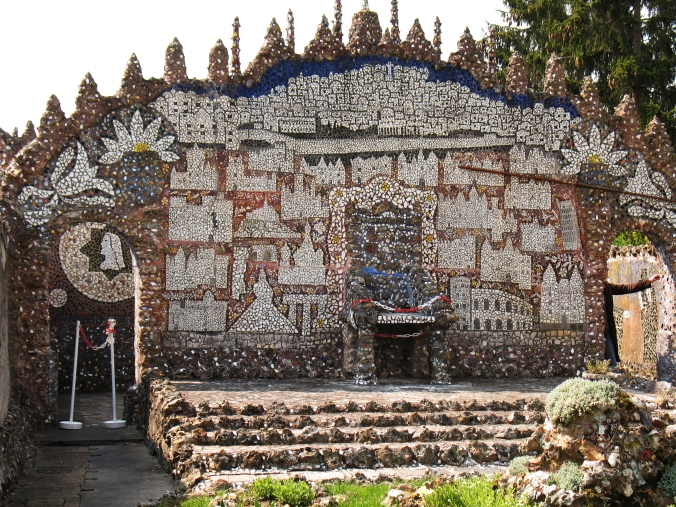 Word of his marvel spread, and in 1954 Pablo Picasso paid a visit. Some say that the “Pic” in “Picassiette”, the nickname given to Isadore by neighbors, refers to Picasso. Assiette is the french work for plate.  But most translations converge on “scrounger” or “scavenger”. Whatever the case, the word “picassiette” coined for Raymond Isadore has entered the French lexicon,  interchangeable with the term for mosaic-ing. Come to think of it, we’d be well served to use “picassiette” as I see spell check does not approve of mosaic-ing or mosaicing, or mosaicking.

Raymond Isadore completed his ouevre in 1962, two years and one day before he turned 65. I’m going to go out on a limb and say he was a happy man.

If you are itching to see more and don’t have a trip to France in your back pocket here’s a nice walk-through video.

In the middle of the fields in the Perche region of France, just 30 kilometers west of Chartres lies an oasis of blue,

a whole ocean tucked away behind the walls surrounding the modest home in the village of Harponvilliers, of nonagenarian,  Renée Bodin.

Renée Bodin,  who calls herself “Hurfane” (a name she derived by combining the first three letters of her father’s name and the first four letters of her mother’s name), spent most of her life  in Paris as a Classics language teacher.  In 1978 she purchased this house as a summer residence: 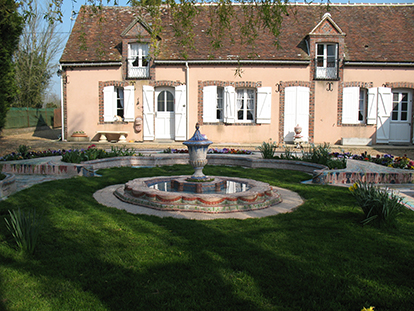 In 1980 she began her mosaic work, but, still being a teacher, her work was limited to weekends and school vacation. When Hurfane retired from teaching in 1992 she threw herself full time into the transformation of her property.  Hurfane feels she’s been working on this oeuvre her whole life as she began envisioning the creation as a child.

We felt lucky to be welcomed for a visit to Hurfane’s mosaic masterpiece as we had arrived at the “Jardins de la Feuilleraie” a the very begining of April, before the official start of the visitor season.  We sheepishly knocked of the door of this tidy but ordinary looking house and patiently waited, wondering if anyone was home.   A tiny, shy-looking woman opened the door and we immediately began apologizing for arriving unannounced and before the start of the visitor season, but, we explained, we had traveled a long way and hoped we might be allowed to have a peak. “Yes, yes, you may, but really, it’s not ready–it’s a mess”, she answered. Of course we said” We don’t mind!” and she ushered us in.  As we walked about, Hurfane darted ahead of us, picking up fallen leaves, which was clearly the “mess” she had been referring to. But really, what’s a few fallen leaves among artists? The grounds were pristine! The first area Hurfane led us to was  her rose-colored garden in which the imagery is a folksy mix of animals, flowers and peasant life. 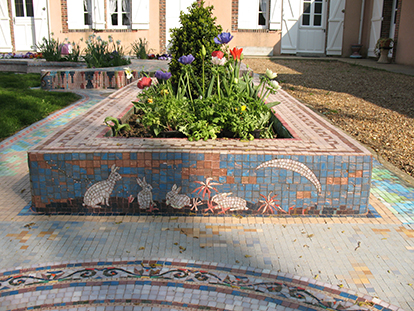 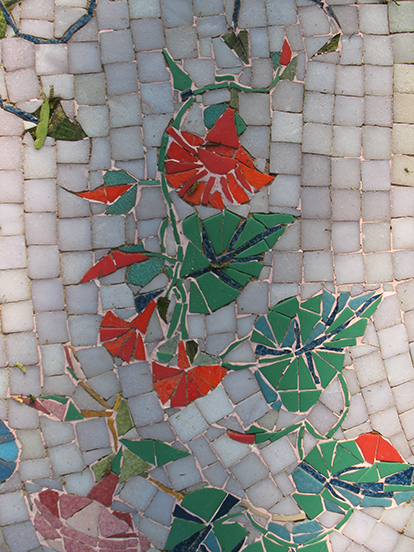 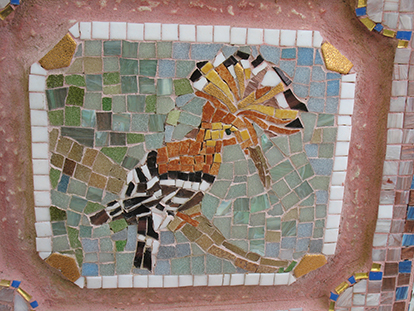 All very lovely, but nothing prepared us for the vast mosaic masterpiece at the back side of the house. It was as if Hurfane’s vision had catapulted itself from human’s puny little concerns  to the vastness of earth’s surfaces and finally to the infinite universe. 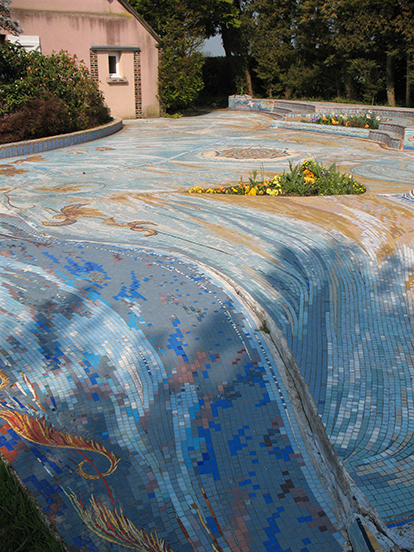 Here she explained were the elements of the universe: the sea, the stars, the heavens. 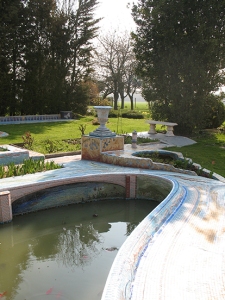 Hurfane had attempted to capture Time itself, but she explained, “Time runs away and is lost forever.”

“They made fun of me when I first began this work–a woman attempting masonry. But really, I found that working with cement was no different than working with flour to make a cake.” And so Hurfane persisted, one tile at a time for forty years. The universe is not quite finished, but almost.