As long as I’ve got you focused on midcoast Maine (see my last post on Davistown Museum and Liberty Tool Company), I wanted to give you a tour of the studio one of my most inspiring artist colleagues, Abbie Read, who lives in the little town of Appleton, Maine–just inland from Belfast. 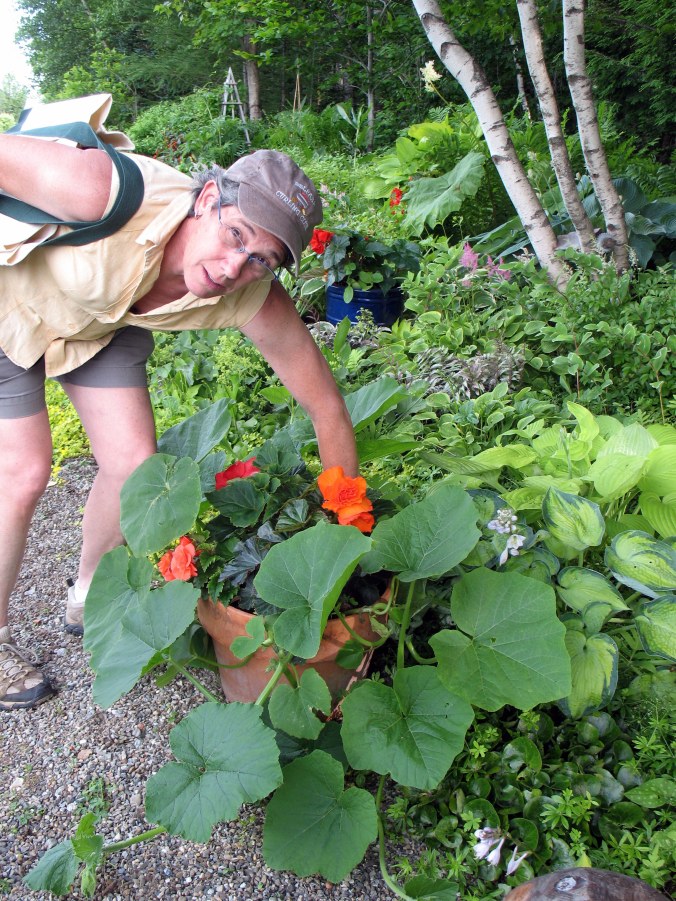 She also happens to be the person who first introduced me to Liberty Tool Company and Skip Brack. Like myself, Abbie always has her eye out for quirky beauty. She is a gardener, a collector, and above all else an artist. You will see from these images of her home and studio that these three pursuits are all rolled together into one seamless existence. Rather than using too many words I’ll let you stroll with me through Abbie’s gardens and studio and you’ll see what I mean.

Roadside view of Abbie’s studio, surrounded by her remarkable garden.

I was paddling with Abbie in the great northern woods of Maine when she spotted this fish-shaped driftwood on the shore. It could not be left behind!

I’ll get back to her gardens before this post wraps up–but time to poke around inside Abbie’s studio:

Here and there I recognize some great finds from Liberty Tool Company. 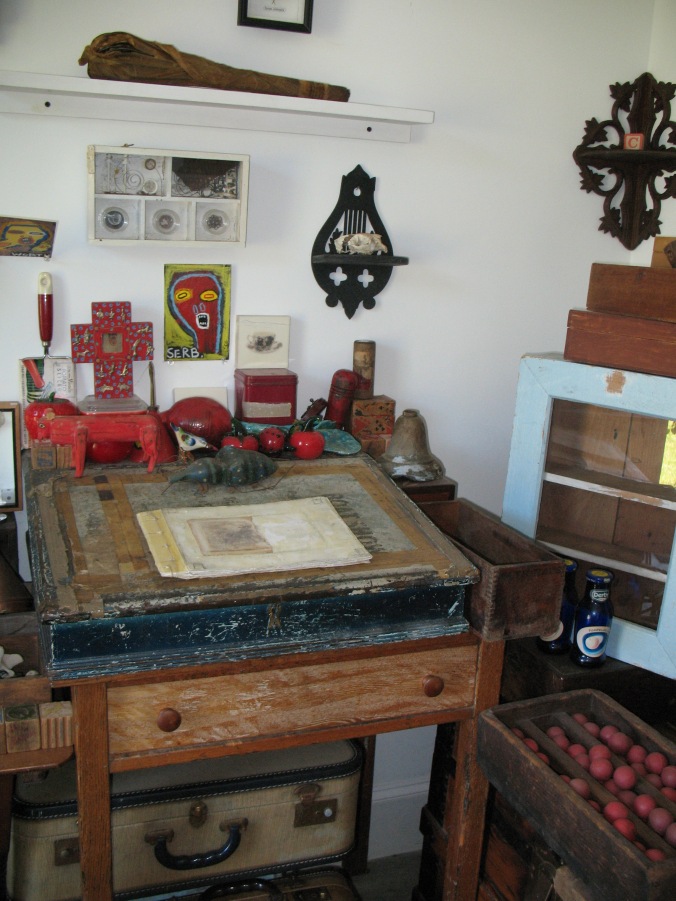 What I love about visiting Abbie’s studio is that you can’t quite  tell where the collections leave off and the artwork begins. 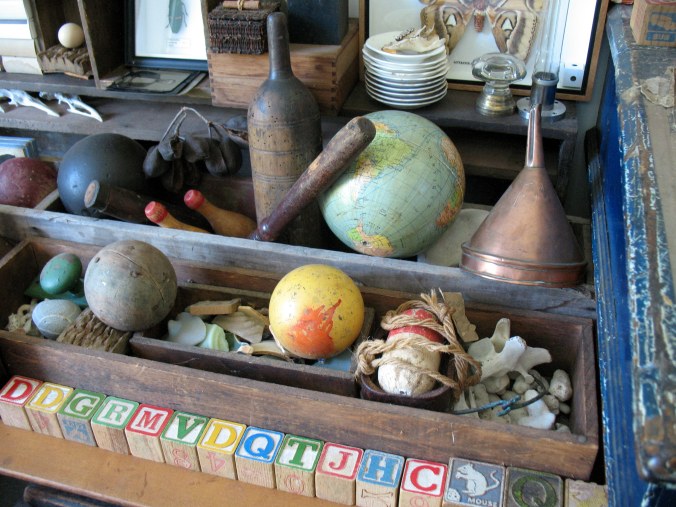 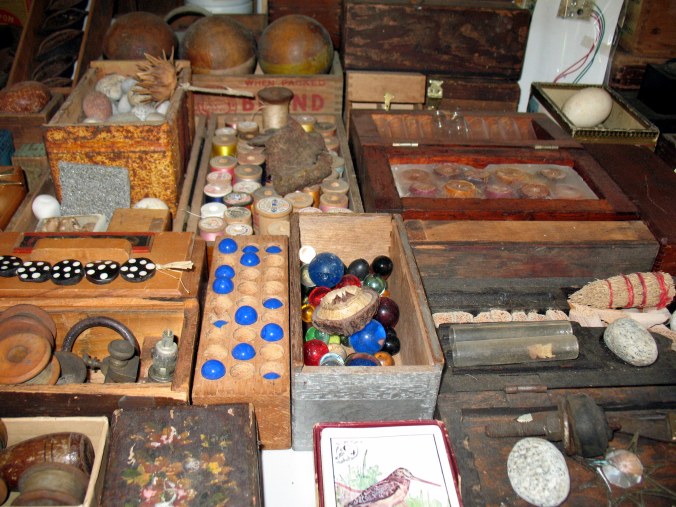 The found objects become installations become artworks, but even so, at any moment a comfortably bedded down little object might be plucked up, manipulated,  and given a whole new context: 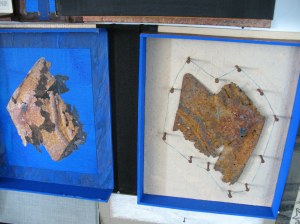 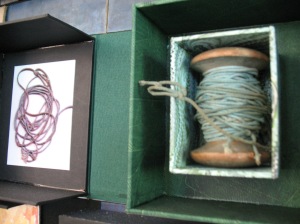 So much more to see, but I promised to get back to the gardens:

And the gardens are great homes for her collection of whirlygigs: 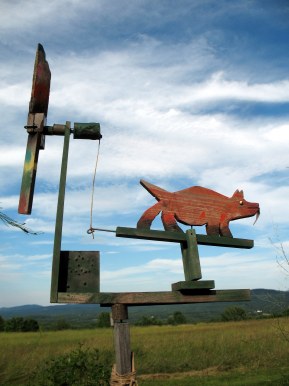 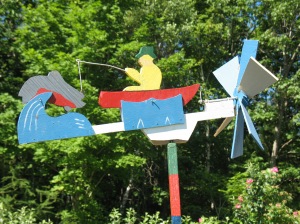 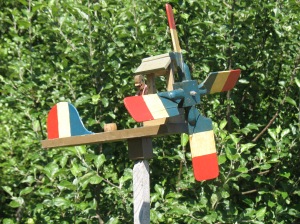 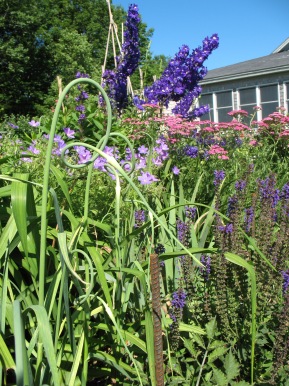 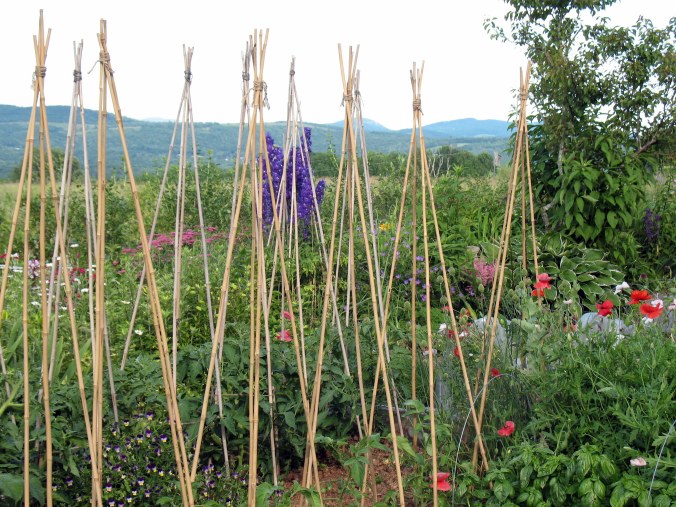 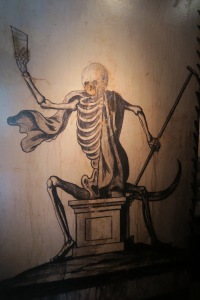 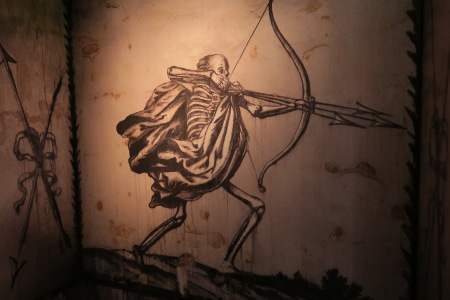 I’ve been back home for a week now but couldn’t keep up with the flood of post-worthy material while traveling–and I just cannot leave the ossuary trip behind without due recording of our last encounter with beautiful bones. The big oval-shaped route we took from Frankfurt , across Bavaria, over to the Czech Republic, with a day to dip our toes into Poland, looped back through northern-ish Germany and ended in culturally rich Cologne (Koln, as you’d say in Deutsch). We had the good fortune of meeting up with fellow artist and Cologne resident  Ulli Böhmelmann who stood patiently waiting for us outside the Basilica of St. Ursula as Hannah Verlin and I once again showed our muddlement with the map. (Cologne, like Boston, favors nonparallel streets which challenge any logic one tries to apply to the cause of getting from here to there)

These few pictures cannot do justice to what one encounters as one enters the side chapel (the Golden Kammer) of St. Ursula’s. The blue-gray night sky walls framed with arches which reach to a vaulted ceiling are completely covered with an impossible number of bones arranged in beautiful patterns and words. 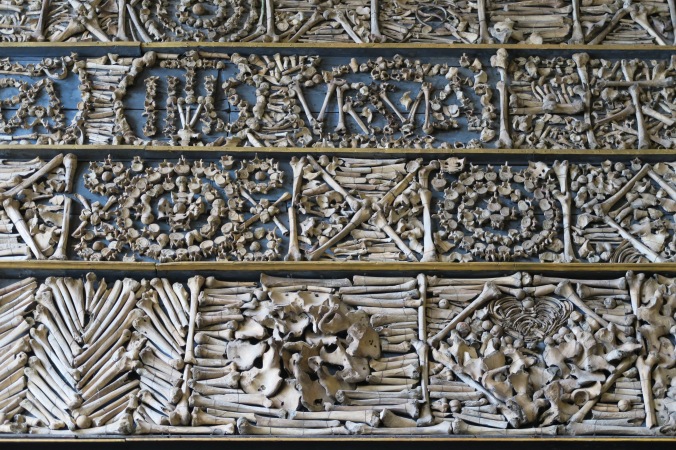 And just below the bones the room is ringed with wooden and silver reliquary busts.

Between these, cloth-wrapped skulls peek out from windows in ornately carved and painted wood columns or gold reliquary boxes. 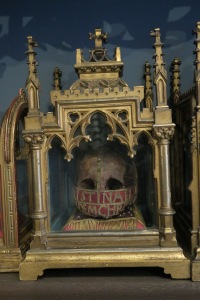 To take in the full measure of this incredibly beautiful, incredibly poignant site one must digest the story of St Ursula and her eleven loyal virgin friends whose very bones adorn the walls and fill the reliquaries. (pay no attention to those pesky anthropologists who after careful analysis declared the bones to belong to a whole array of beings from newborns, toddlers  and–WHAAAT! Matiffs?!?!! Save yourself the trouble of verifying the martyrdom of Ursula story by looking it up on Wikipedia or elsewhere–there are so many confusing and conflicting accounts of Ursula that she was removed from the official “General Roman Calendar” of saints in 1969–Harrumph! And oh, let’s not quibble about the number of virgins which started as 11 in the 5th century telling and grew to 11,000 by the 9th century. Well, all this  has not hurt Ursula’s status in Cologne where she is still considered their patron saint.)

–and here is why:

As you can see from the above sculpture, Ursula was incredibly beautiful and was pursued by innumerable suitors (it probably didn’t hurt that she was also a princess). Ursula turned them down, one after the other, ’til one day a particularly aggressive, and oh dear, pagan prince declared that if Ursula would not agree to marry him he would see to it that Cologne was destroyed. Talk about pressure! Her father the king, who until this point had indulged Ursula, begged her to reconsider. She could see his point but still, being a pious Christian princess, felt a trip to consult with the pope was in order. She gathered her 11 best friends and off they sailed to Rome, a bold, bold move– a pilgrimage of WOMEN–unheard of!  While sailing down (or was it up?) the Rhine, their ship was attacked by Huns, whose leader, Attila, was also smitten by Ursula and asked her to marry him. She did not need further consultation on this one–the answer was NO and Attila’s response was swift and not surprising, given his bad reputation. Ursula and the eleven virgins (who also refused to couple with the Huns) were all beheaded. Attila declared that Cologne would be stormed and destroyed. But this is not the end of the story. That night every single Hun soldier had the SAME dream about Ursula. I cannot tell you what exactly she did in this dream, but it was enough to scare every soldier into disobeying Attila’s orders to torch Cologne. Cologne was saved!!! What I can’t understand is the papal problem with recognizing Ursula as a saint. 1969, the whole western world is pretty much going to pot and the Vatican decides now’s a good time to tighten up on sainthood requirements? Geez!

As I mentioned earlier, our visit to Cologne was greatly sweetened by the two days we spent with Ulli Böhmelmann who shepherded us here and there throughout her interesting and vibrant city, poking around the contemporary art galleries, design center,

and, most lovely of all, a visit to her studio. Ulli will be coming to Boston to present at the Transcultural Exchange in February 2016 if you want to hear her speak about the sculpture project she did in Russia last year. 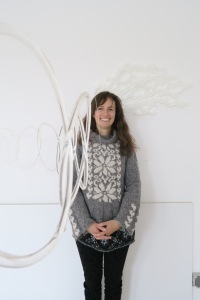