For years I’ve been keeping files, clipping articles, surfing the net and tramping around the world to visit quirky environments. The appendixes of all my outsider art books have circled addresses. My global maps have post-its stuck here and there. I see patterns and odd concentrations of sites. I think I’m right about this: the highest concentration of outsider art environments in the world are to be found in France and–wait for it–Wisconsin! France and Wisconsin?? Sometimes when I can’t go to sleep at night I ponder this and come up with theories.  It just so happens that my mother was French and I feel very connected to France. I’ve traveled many times to France and visited many fantastic oddities there. It has not helped me figure out the French penchant (or maybe it’s tolerance?) for the house project gotten out of hand. But the Wisconsin question–this really had me stumped, so several years ago I used my sabbatical to crisscross the Wisconsin map to visit almost every known odd property in this lovely, bucolic state. 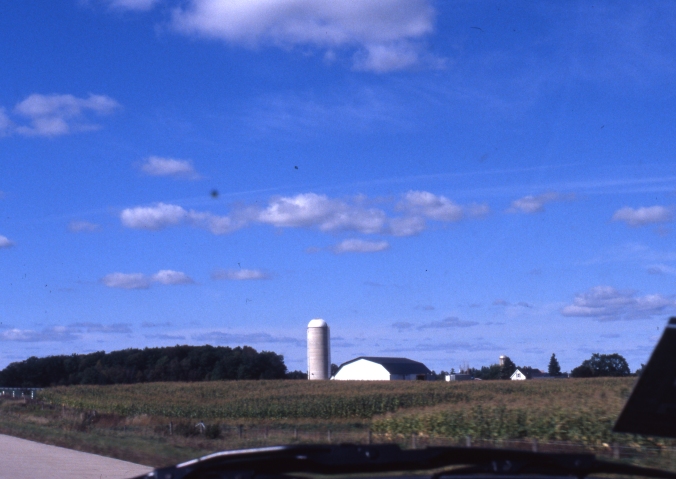 Coming from New England, where there’s an unspoken but expected level of acceptable comportment and yards must be just so, I was stunned to see so much quirky creativity sprouting up here and there in a region that otherwise looks so traditional.

It was a revelation, and I do have a wee theory on the question, why Wisconsin?  Here’s what I learned: It all started with Catholic priest, Father Dobberstein who emigrated to Wisconsin from Germany in the late 1800’s. He was one wicked smart (poor choice of qualifiers for someone in the priesthood–sorry–I’m from Massachusetts, I have to use the word “wicked” whenever possible). He was fluent in six languages and was a passionate rock-hound. Now, how to pursue mineralogy and  answer the higher calling all in one fell swoop? God does work in mysterious ways; he smote Dobberstein with pneumonia which nearly killed him. Dobberstein vowed that should he recover he would build a shrine to the Virgin Mary in gratitude. He had seen grotto shrines in his homeland  and took it from there. Dobberstein threw himself into a decades long building project on the grounds of his newly assigned parish in West Bend,  Iowa. Now I have not yet seen the glorious and gigantic Grotto of Redemption in Iowa (yes, on my bucket list) , but I got a taste for Dobberstein’s obsessive workmanship and idiosyncratic aesthetic in one of his subsequent creations, the Grotto of the Holy Family in St Joseph (just outside of LaCrosse), Wisconsin where one can clearly see his geologist’s juices freely mixing with his religious (and patriotic) zeal. 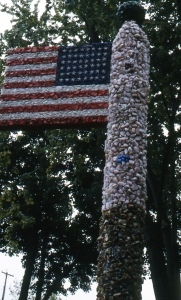 The interior of the grotto is a mosaic wonder of golden sheets of mica, pink quartz and stalactites Dobberstein whacked from the ceiling of the Carlsbad Cavern for the glory of God. 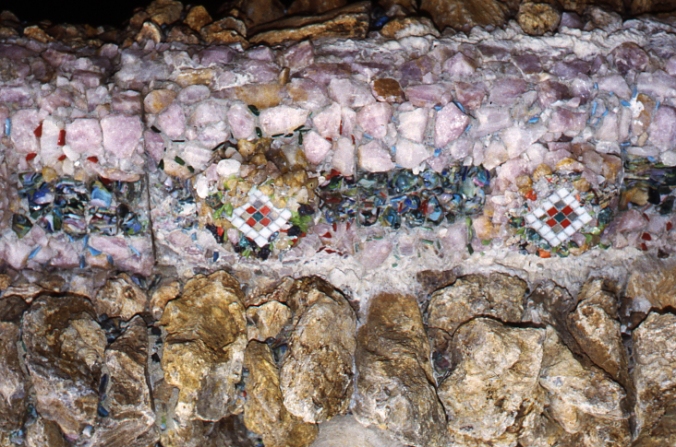 Meanwhile, in the midst of Dobberstein’s building frenzy, another priest with a remarkably similar background, German born Mathias Wernerus (who trained for the priesthood in the same seminary as Dobberstein) was assigned a parish in Dickeyville, where he too saw fit to build a grotto (gotta love the impulse to build a grotto on the open rolling land of Wisconsin) which was eventually to become Wisconsin’s most popular tourist attraction in the 1930’s.

Like Dobberstein, Wernerus had a penchant for precious minerals; the trunk above is made with petrified wood. Add to this Wernerus’s brilliant idea of incorporating Native American artifacts…oh boy…

And forget about the separation of church and state. Praise the Lord and praise America! Here’s Christopher Columbus happily residing amid the Holy Family: 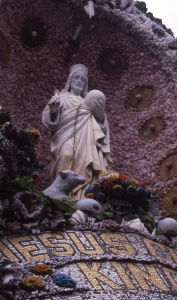 The Columbus theme carries over nicely to the anchor-adorned garden wall: Parishioners were asked (and apparently agreed) to contribute their labor (Wernerus used to round up the kids as Sunday school was winding down) as well as their material goods to the effort. One can spot personal items such as brooches, teacups and pots and sundry bric a brac integrated into the mosaic-ed surface. 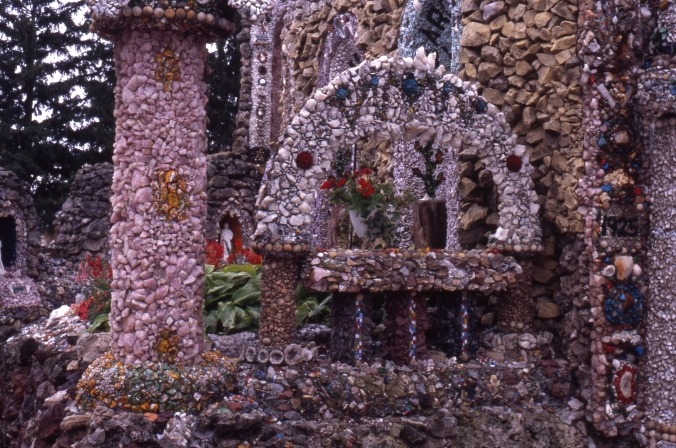 In the 1930’s, 40’s and 50’s as many as 10,000 visitors flooded the tiny town (population 250 at the time of the grotto building.) of Dickeyville on any given Sunday to ooh and ah over this marvel.  It is thus not surprising that shortly after the completion of the Dickeyville Grotto various mosaic creations began to spring up in yards across Wisconsin.

I will take you to see some of the other Wisconsin creations in subsequent posts.

I cannot end this post without mentioning the royal treatment we received everywhere as tourists to Wisconsin. This state truly lives up to its Midwest NICE reputation. The lady who ran the gift shop at the Dickeyville Grotto was so bowled over that we were visiting from Massachusetts ( I believe she said, “My Lord! MASSACHUSETTS?!?”) that she insisted that we pick out souvenirs and not pay for them! She would not take no for an answer so I came home with Dickeyville Grotto playing cards, 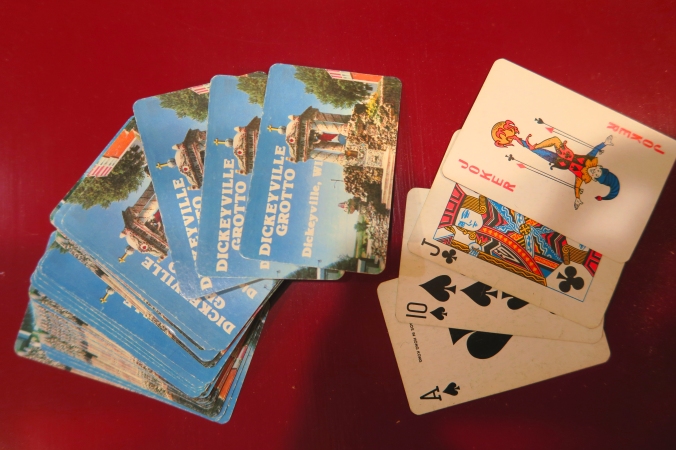