I know, Part 2 was a long time coming, but on this dank and dreary November day, what better place to visit than Newfoundland (again!) where art  is made from a gray day. 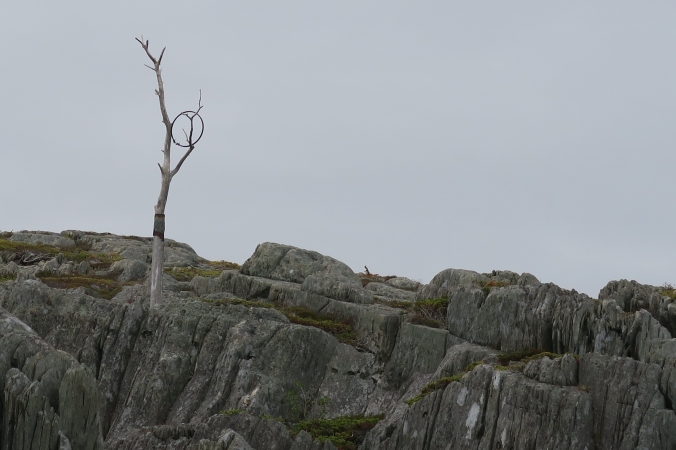 Walk the paths of Keels and you’ll surely discover the poetic sculpture of John Hofstetter, tucked here and there, in and of the landscape.

The little settlement of Keels (around 60 year round residents) is just down the road from Duntara where I spent two weeks last summer at Two Rooms Artist Residency.

Before this summer I had never heard of Keels, but interestingly enough I had already seen Keels on the big screen  the previous year in one of my recent  favorite movies, “Maudie”.  “Maudie” is a wonderful accounting of the true life Nova Scotia folk artist, Maude Dowley Lewis. When the first rugged scenes rolled onto the screen I turned to my husband and said, “That’s not Nova Scotia. That’s Newfoundland! ” 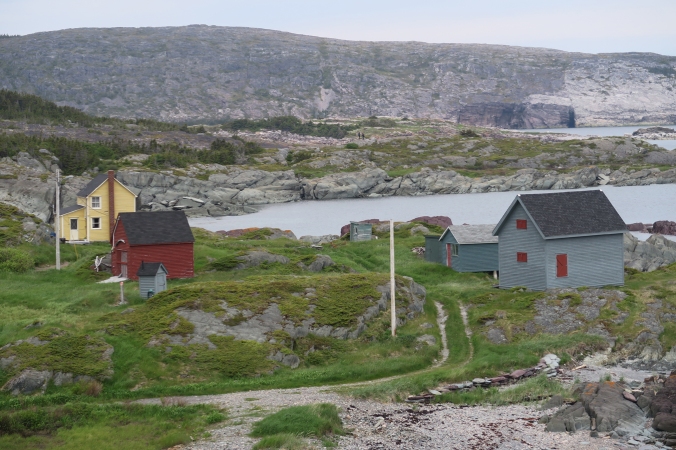 Indeed, when the film makers went looking for a setting that would feel like Marshaltown, Nova Scotia of the 1930’s they turned to lovely, unspoiled Keels.  So when I pulled into Keels I saw a familiar site– the general store which had played a major role in the movie. 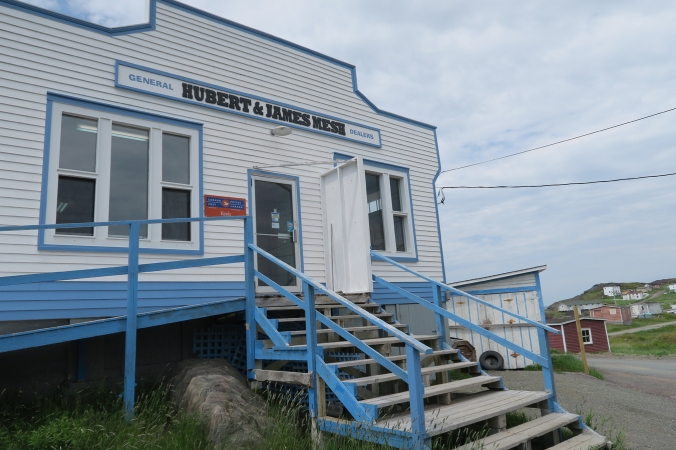 The store, shuttered prior to the filming, has now been rejuvenated and re-opened by Selby Mesh who has nicely combined the movie props with everyday essentials. Hannah, my art partner, and I set about shopping for our dinner. We got right to dinner planning: 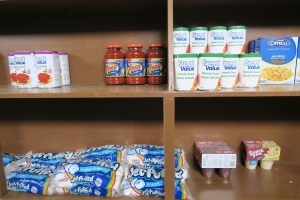 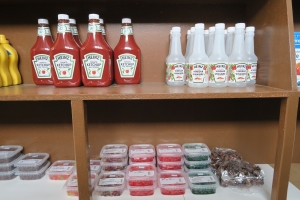 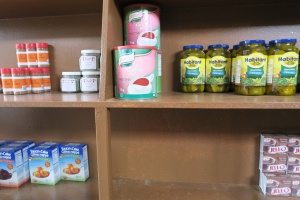 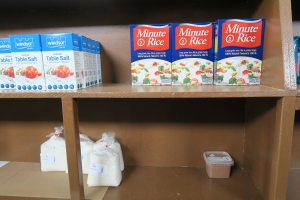 When we brought our supplies (including that lone bag of dates on the upper right–what a find!) to the cashier, she studied us very carefully and asked, “You’re not by chance, Hannah and Jessica, are you?” How did she know???? She turned and pointed to the bulletin board where we found our mug shots hanging.  Nice! 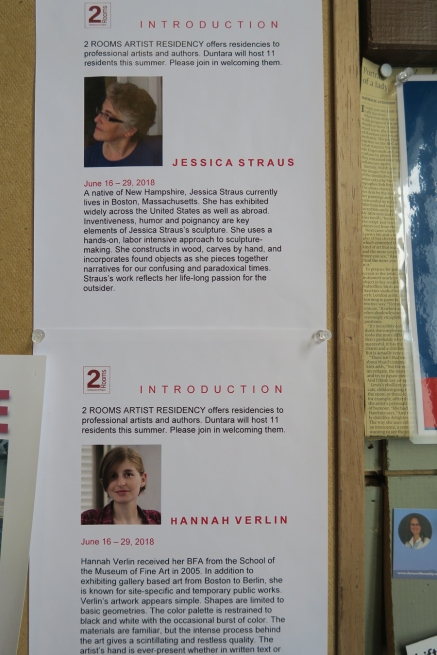 Turns out Keels has a lot to offer beyond the charming general store.  Folks drive a LONG way to order up Clayton’s hand cut fries at his cheerful Chip Truck. Never mind that our fingers were freezing as we sat in the 40 degree (sorry, Canada–that’s Fahrenheit) drizzle—mmm, mmm, mmm! Those fries were GOOD! 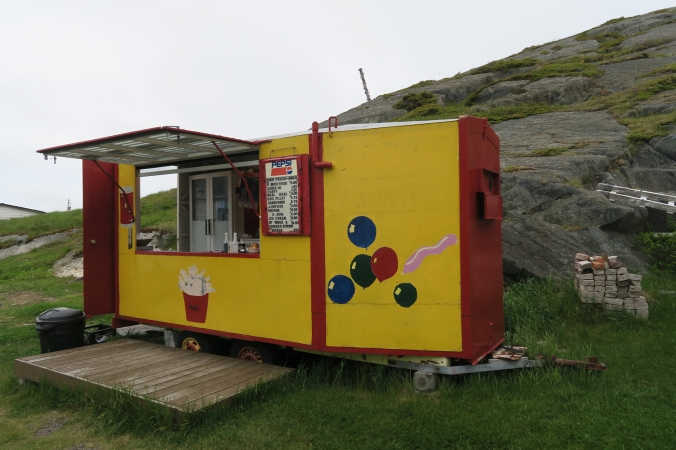 As we finished up, Clayton invited us to tour his lovingly restored home, one of the crown jewels in Keels. 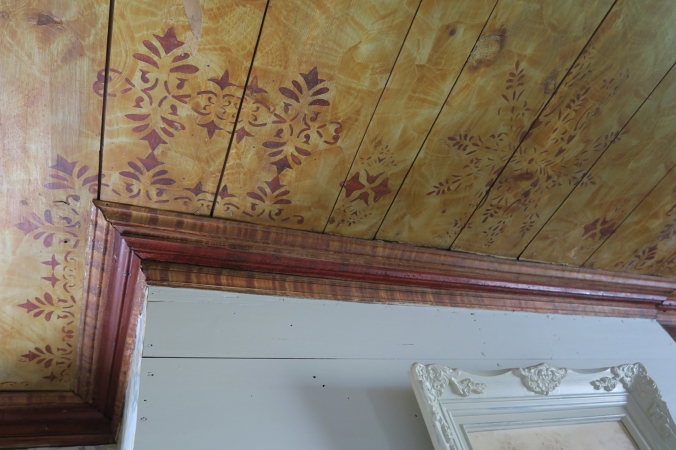 Besides the renown of Clayton’s Chip truck, Keels is “famous” for its Devil’s Footprints. 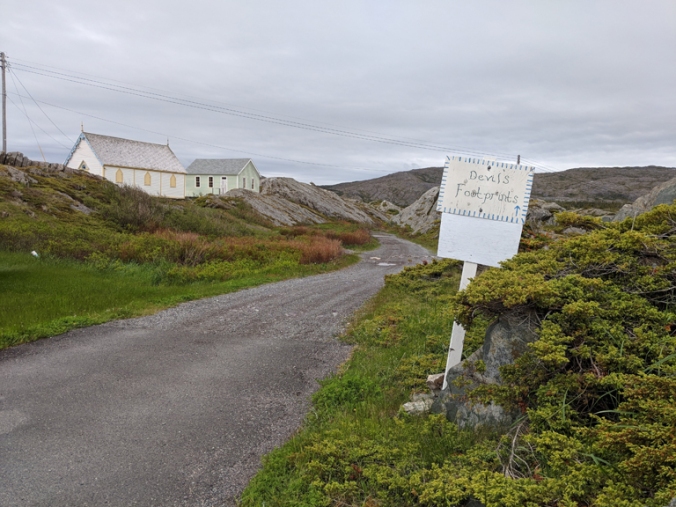 Long, long ago Satan emerged from the sea and walked through Keels. His cloven hoof prints can be followed along the shore. 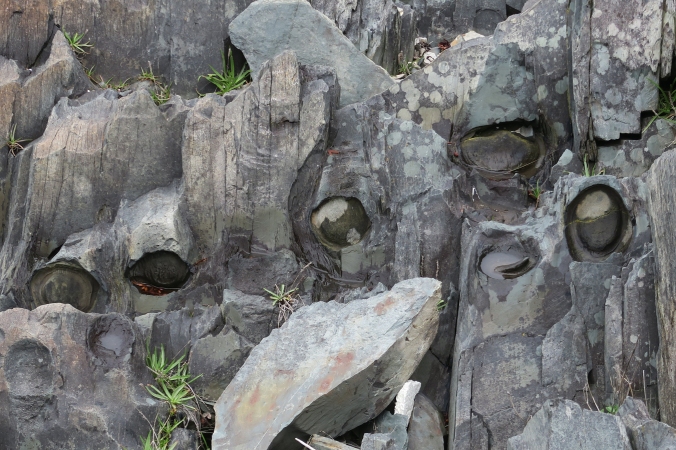 We took Satan’s path  and found astonishing geology along the coast. Underfoot and forming walls to our sides were richly textured surfaces of slate. 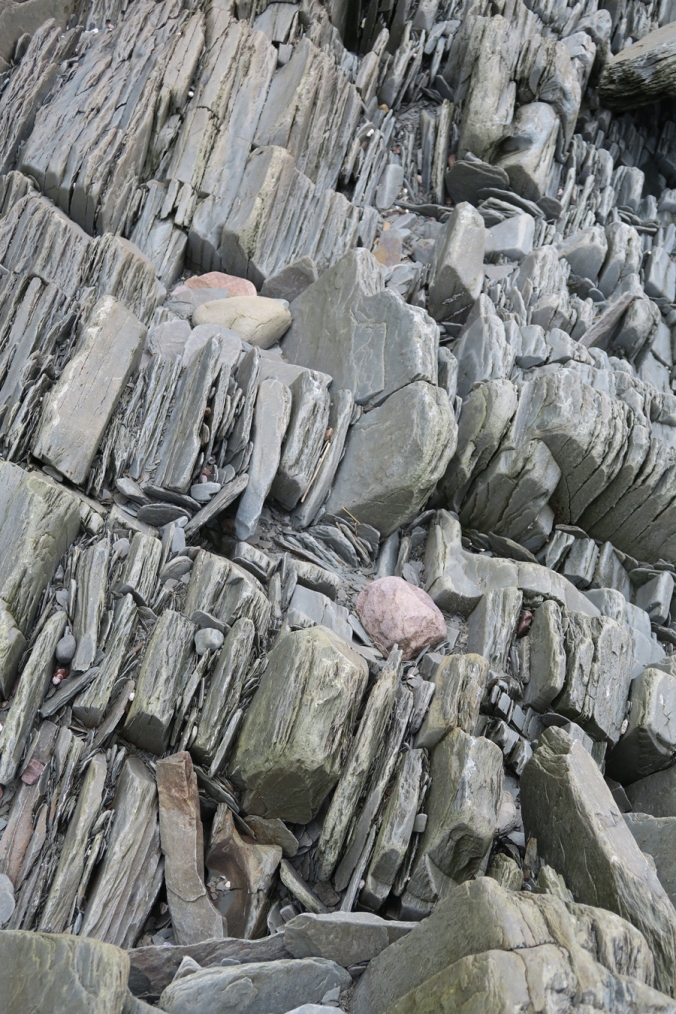 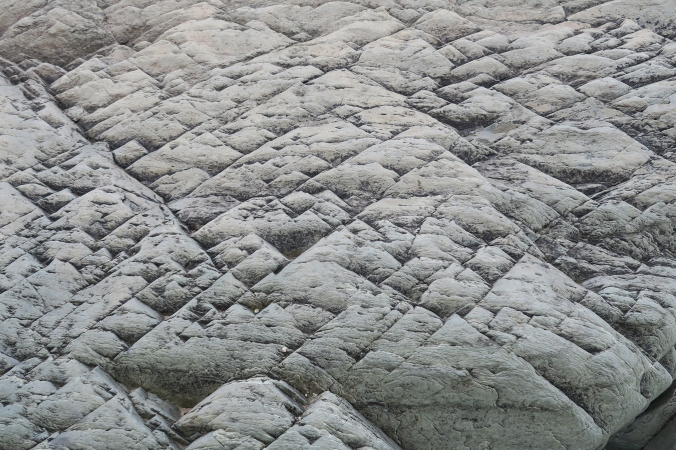 Our slate trail grew narrower and narrower til it ended at a “V” at the edge of the sea. 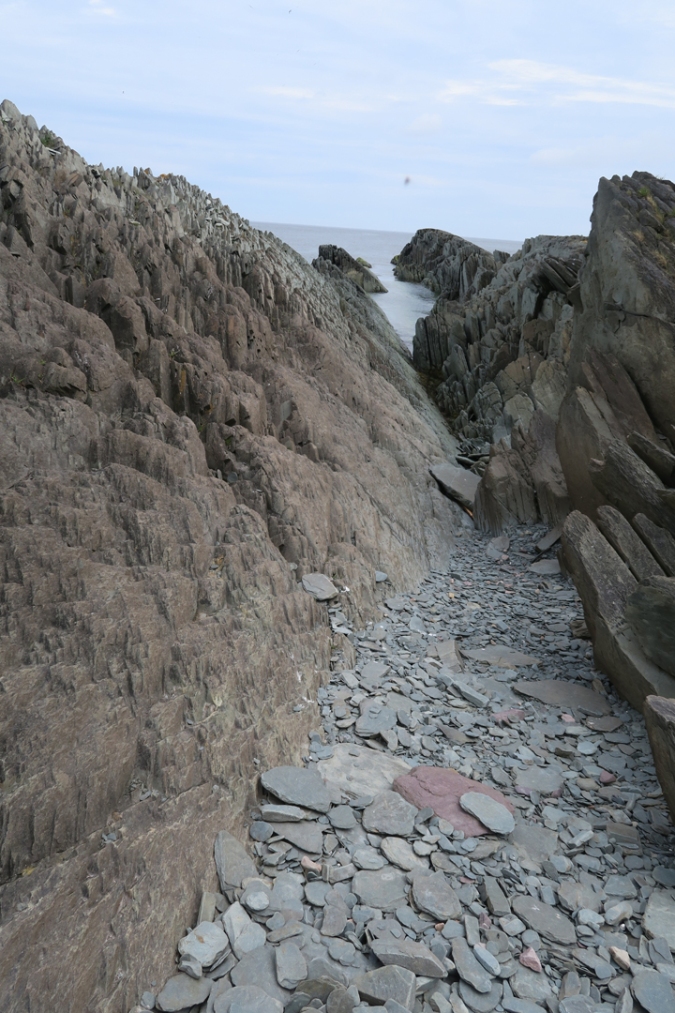 I think we found the crevice from which Satan emerged! 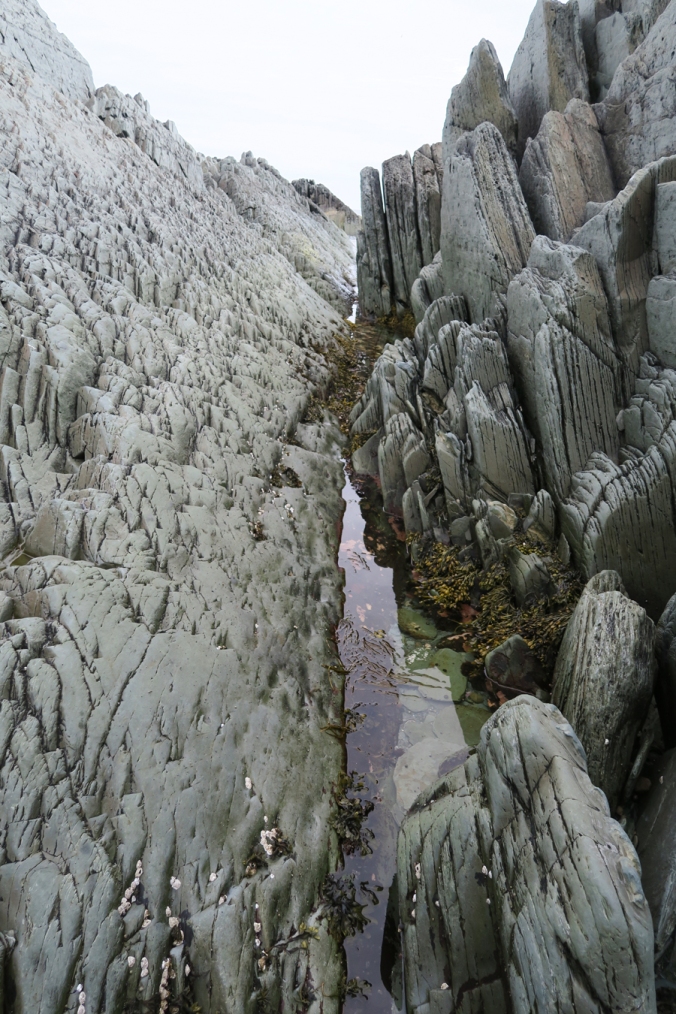 And who knew? Slate comes in gray AND RED! 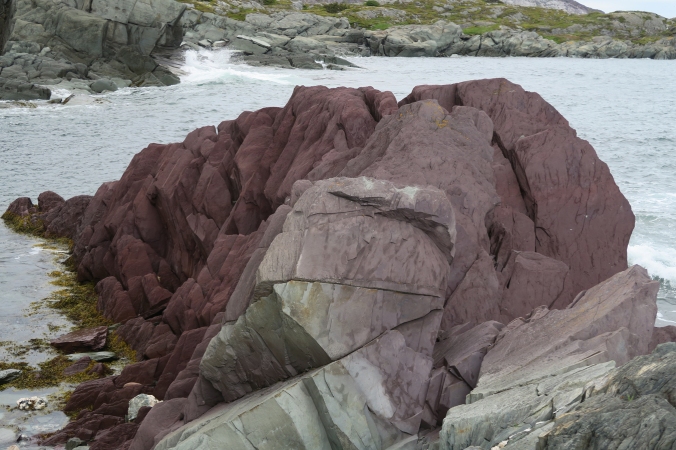 Lured by Keel’s craggy landscape I came back the next day to try my first  “Float”. I had been assembling a big Tyvek map in my studio shed in Duntara.  I had just lifted the Newfoundland section of the map  and levitated it over the rest of its watery surroundings. 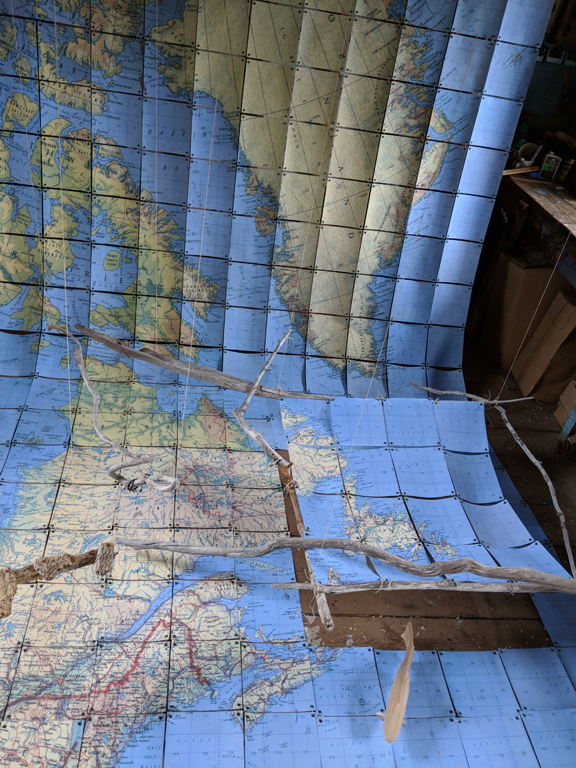 Now I wanted to let it be carried by the real tides–its fate up to the whims of the ocean, as Newfoundland’s fate has always been.

My tentative first attempt with a test section was encouragingly successful. 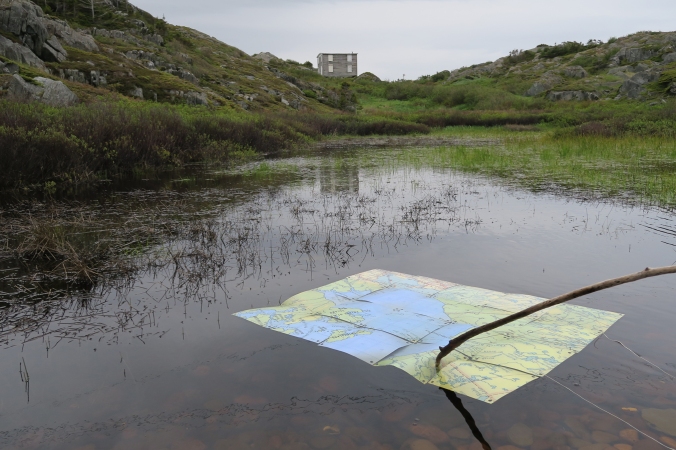 The Tyvek floated perfectly! The ink didn’t run! It didn’t need to be a attached by strings!

So back to the shed I went to fetch a larger section. I had fretted over this work and here it was floating in this beautiful austerity–visual poetry! The map undulated in the gently lapping water like a jellyfish. 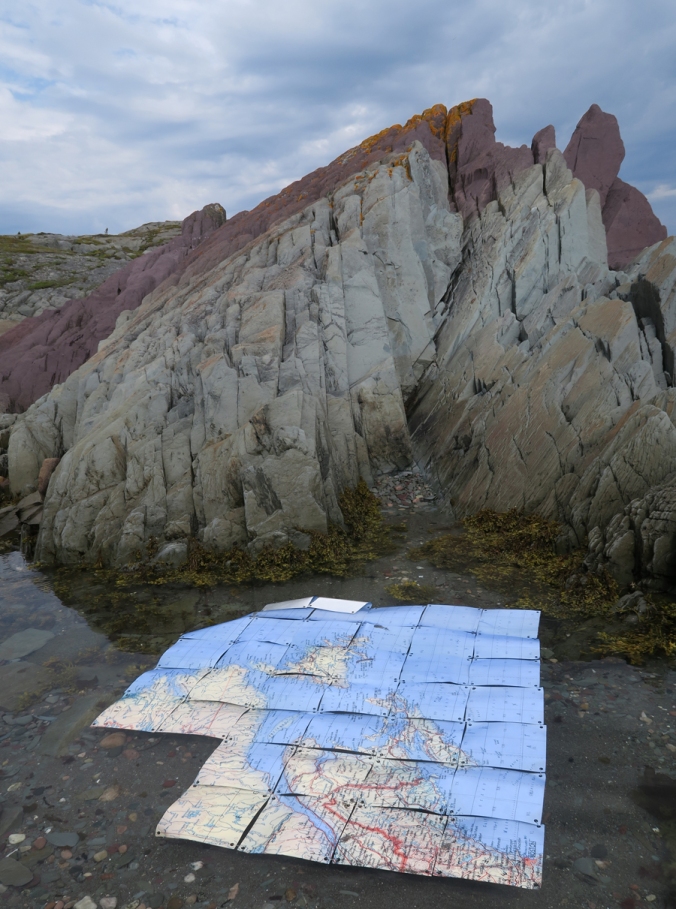 How would it take to the surf? 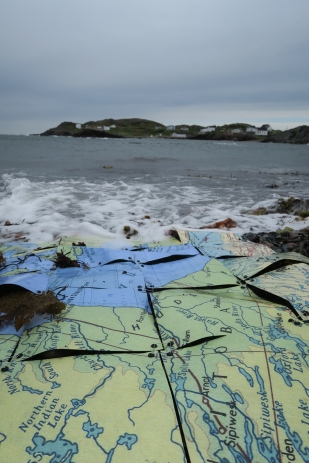 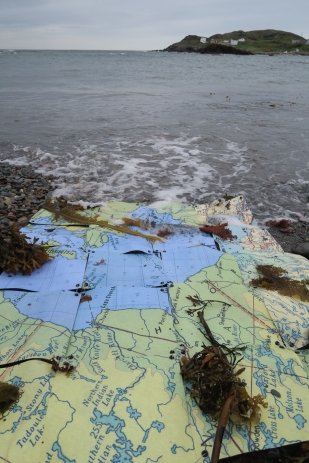 Well… like Newfoundland itself:  Fragile but scrappy and RESILIENT! 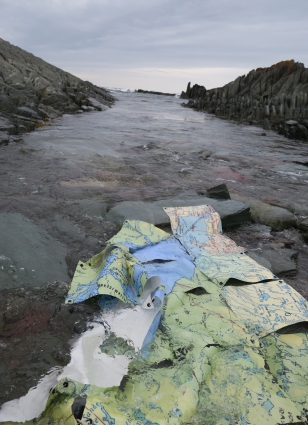 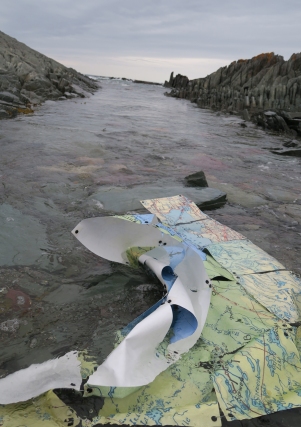 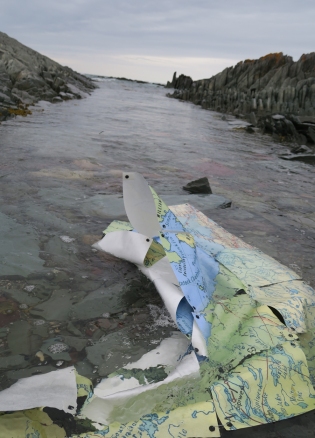 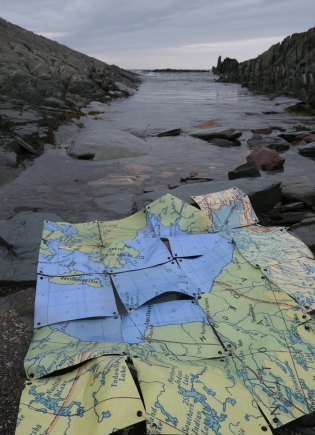